Domestically, the Oil and Natural Gas Corporation (ONGC) are the 'superteam' of Indian Basketball, the desi Golden State Warriors, featuring a roster heady with several of India's finest and most experienced players, entering each competition as they earn equal parts of love and envy, and - for the last few years - almost always ending up with the gold. Now, this talented squad from Dehradun will get their chance to prove that their success can translate to rivals across the border, too. 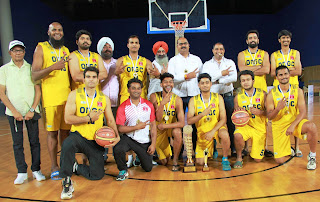 Starting this weekend, ONGC will represent India at the 2016 FIBA Asia Champions Cup in Chenzhou, the city in China's Hunan province. This is the premier basketball tournament for the best Men's basketball clubs - not national teams - from across the continent. The FIBA Asia CC tipped off today, Saturday October 8th and will be held until the finale on October 16. A total of ten teams from different Asian countries will be playing games over the next week at the Chenzhou Olympic Sports Centre Gymnasium in Chenzhou. This is the return of the tournament after a two-year hiatus since the 2013 edition which was held in Jordan.

The participating teams this year are divided into two groups of five each, with ONGC in Group A along with Petrochimi, Al-Riyadi, Al-Rayyan, and Pauian. All the selected teams have won their local club championships - ONGC qualified with their recent win at the 2016 Federation Cup in Goa.

While the duo of Amrit Pal Singh and Vishesh Bhriguvanshi are two of the best at their positions in Asia, ONGC are bound to struggle against all of the Preliminary Round teams because of the international inexperience of the rest of the players on ONGC's roster. Dominating against IOB or the Indian Army may be one thing, but going against experienced club teams from other countries - many of whom feature excellent foreign imports - is going to be a huge challenge to overcome. ONGC's toughest matchup will likely be against Qatar's Al Rayyan, who were the runners-up in 2013 and are looking for their third title at the FIBA Asia CC. Iran teams have won five titles at this tournament, and Petrochimi will be hoping to become the sixth. Over in Group B, China's Xinjiang - featuring former NBA player Andray Blatche and recently drafted Zhou Qi - will be one of the title favourites representing the home nation.

ONGC will hope not to repeat history from 2013, where they lost all six of the games they played in and finished at last place (eighth). But Indian basketball has managed to turn heads and make rapid improvements over the recent years: will ONGC continue to wave the tiranga high and cause some more shocks for the Asian basketball world?