A tantalizing finale between two 'bankmen' settled the 3rd Mulki Sunder Ram Shetty All India Basketball Tournament, a prestigious, invitational club basketball meet, in Bengaluru on Sunday, October 23rd. The host team Vijaya Bank (Bengaluru), a young squad that grew up leaps and bounds as the tournament progressed, defeated Indian Bank (Chennai) 86-82 in a tightly-contested finale. The victory gave the hosts their first every victory in the third edition of this tournament. 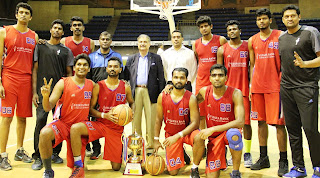 Held at the Kanteerava Indoor Stadium in Bengaluru from October 19-23, 2016, the tournament marks the memory of the Late Mulki Sunder Ram Shetty, a longstanding former Chairman of Vijaya Bank, who was instrumental in the growth of the bank through the 60s and 70s. There were 7 teams in the fray in this tournament, divided into two Groups. The top two teams from each Group progressed to the semifinals followed by the finals. Several top Indian international players took part, both from the senior and junior teams.

Two of those rising young international talents made their mark in a memorable back-and-forth competition in the final, Vijaya Bank's Arvind Arumugam and Indian Bank's Hariram Ragupathy. Indian Bank held a slight advantage earlier in the game, as his team led 45-43 at halftime. But a crucial third-quarter run turned proceedings in Vijaya Bank's favour, who outscored their opponents 23-14 in the period to take a lead. Ragupathy (34) and A. Surya (20) led a comeback for Indian Bank, but they fell short as Vijaya Bank won the final 86-82. Arumugam finished the final with a cherry on top of his fantastic performances all tournament with a game-high 38. 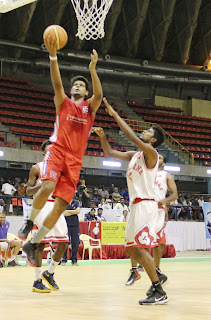 Earlier in the day, during the third/fourth place clash, Sports Development Authority of Tamil Nadu (SDAT) from Chennai relied on 28 points by Justin to defeat Kochi's Customs and Central Excise, who were led by international talent Basil Philip (18).

For his dominant performances, the winning squad's star Arvind Arumugam was named the tournament's MVP. Guruprasad Nayak of President's 11 (Karnataka) was named the Most Promising Player of the tournament. Vijaya Bank’s MD and CEO Kishore Kumar Sansi was the chief guest for the finale and he distributed the team and individual trophies and cash prizes.