The fast-improving 21-year-old is beginning to realize the depths of his talents.

This article first published as part of SLAM Magazine's #SLAMTop50 on SLAMOnline.com on September 30, 2016. Here is the original version of the piece. The Minnesota Timberwolves drafted Karl-Anthony Towns number one in the draft last year. Towns went on to shatter his own high expectations and posted one of the finest rookie seasons in recent history. He was the unanimous rookie of the year, shot his way to early comparisons to Tim Duncan and Kevin Garnett, and even earned two solo SLAM covers.

The Timberwolves hired Tom Thibodeau as Head Coach and president of basketball operations in April, immediately setting off the promise of stability, defensive intensity, and long essays about Thibs’s “tireless work ethic”.

The Timberwolves, usually an ignored, small market in the NBA, were the centrepiece of sports-talk in reminiscence after the retirement of Kevin Garnett, the greatest player in their franchise by a country mile. KG was the franchise leader in games played, minutes, points, rebounds, assists, blocks, steals, rookies barked at, opponents intimidated, Honey Nut Cheerios referenced, and, of course, the love of the Timberwolves’ faithful.

The Timberwolves suffered tragedy this time last year when coach Flip Saunders passed away, and his death cast a shadow over the franchise he was closely connected to for the rest of the season.

Ricky Rubio got injured, came back, struggled to shoot, played well, played badly, and was in trade discussions every waking moment.

Zach LaVine won the Slam Dunk contest, and then battled Aaron Gordon in a historic battle to win it again.

Minnesota drafted Kris Dunn, who quickly earned the high honor of being named Rookie Most Likely to win the Rookie of the Year award by his peers. The rising Timberwolves already had a new potential idol.

(But we forgot about Andrew Wiggins)

Two years ago, Minnesota traded their second-greatest player, Kevin Love, to join LeBron James in return for an unproven rookie out of Kansas. Love had his ups and downs in Cleveland, didn’t fit in, got hurt, returned, then did fit in (sort of), defended Steph Curry in the final possession of Game 7, and won a title. Championships redeem everything, but Love’s uncertain place in the team hierarchy have hover over him the last two years, and may continue to hover around for as long as he remains in Cleveland. Minnesota, of course, remain happy with their returns. 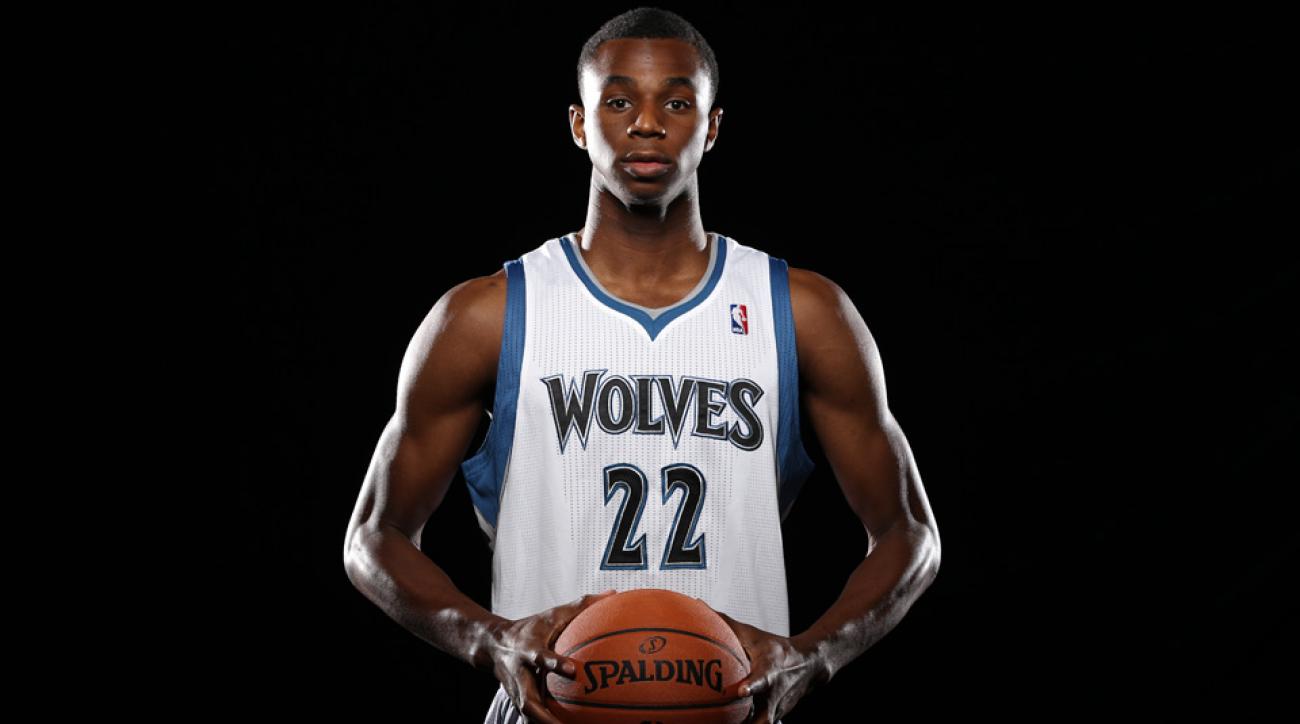 (Yes, but, we forgot about Andrew Wiggins)

With all the changes, diversions, press releases, dunk contests, ankle surgeries, and the waves of optimism, it seems that somewhere, one of the most crucial members of that rising wave – Andrew Wiggins – seems to have been lost in the shuffle. Now entering his third season, the fast-improving 21-year-old is poised to have a season that you won’t forget.

Wiggins reacted to an early career snub by the Cavaliers by thriving in Minnesota and winning the rookie of the year award, playing all 82 games in his rookie season and averaging 16.9 points on 43.7 percent shooting to with 4.6 rebounds in the process. Unlike most rookies, Wiggins’ biggest strength turned out to be his motor: he played over 36 minutes per game for the young Timberwolves while doing heavy lifting on both ends of the floor. His offense earned him the highlights, he defence earned him the burn. The Timberwolves won 16 games, but even in their horrific record, they looked fun.

Then, even as Towns came to town and stole the show to his own ROY season, Wiggins, quietly, didn’t go away. In his second season, the Canadian upped his averages to 20.7 ppg while improving his shooting percentage to nearly 46 percent from the floor. The Timberwolves won 29 games, but even in their poor record, they looked tantalizing.

And here we stand now. Wiggins, before season number 3, armed with the perfect atmosphere for stability and success. He will get to play off an elite big man in Towns and thrive as the two try to emulate a modern remix of post-and-perimeter domination. He will be flanked by the ever-improving Zach LaVine by his side, and two point guards – Rubio and Dunn – who will both bring unique strengths to run the offense by his side. He will be coached by a defensive mastermind in Thibodeau, who will surely maximize his potential to greater individual and team success.

Wiggins doesn’t say much: his Twitter feed is mostly a mention of his national or sponsor obligations and his on-court demeanour could fool you into occasionally even forgetting he’s out there.

But, he has flashes of brilliance that destroy his silences with primal screams. Like the time he attempted a 720 dunk and broke the NBA internet. Like the time he owned the overtime period to hand the Warriors only their ninth loss of the regular season. Like how he feels like a future basketball Jedi, only now realizing the far reaches of his limitless powers.

(Don’t forget about Andrew Wiggins)
Posted by KARAN MADHOK at 21:16