Last month, the Paralympics were held in Rio, where USA dominated both the men's and women's wheelchair basketball tournaments to win gold medals in each competition. The tournament showcased the best of wheelchair basketball talent in the world and the growing attention to the sport. Back home in India, however, the growth of the game still lags far behind international standards. 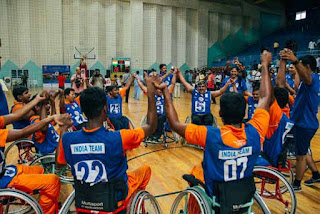 This year, the Wheelchair Basketball Federation of India (WBFI) is hoping to change that, and they are seeking YOUR help!

Short of funds, the WBFI has turned to crowdfunding to raise money to support an U23 Men's Indian Wheelchair Basketball team to Thailand in January. To reach their financial goal of Rs.4,912,500, they first started a campaign on Milaap.org, but were only able to collect Rs. 11,000 before the campaign closed. But now, with the help of a certain legendary Indian athlete, the WBFI's hopes to garner more attention for this project has been rekindled.

With the support of Padma Shri winner Milkha Singh, one of India's greatest-ever athletes, the WBFI have now set up a new campaign page for crowdfunding on FuelADream.com. At the time of writing, they had raised Rs. 1,53,500 and were about 51 days away in their campaign. This is still only 10 percent of their financial goal, so any funding that they receive will help in getting our team to Thailand for this first-of-its-kind opportunity.

At the Paralympics, nineteen Indian athletes took part, collecting four medals in Brazil. But all the athletes took part in indvidual sports. It's high that that differently-abled athletes also have the opportunity to pursue their athletic dreams from India. The WBFI initiative is promising: instead of waiting for support from any Ministry, they are reaching out to the people in making their dreams come true. If the Indian team finishes in the Top 3 at the Asia Oceania Championship, they will make it to World Championship in Canada in June 2017. Hopefully, this can be start of a positive trend and the Indian wheelchair basketball team can make some waves internationally.

Check out the WBFI campaign and crowdfunding page here, which also features the full list of probables from India for the U23 tournament in Thailand.