I wrote this feature for SLAM Online, and it was originally published on their website on September 3, 2014. 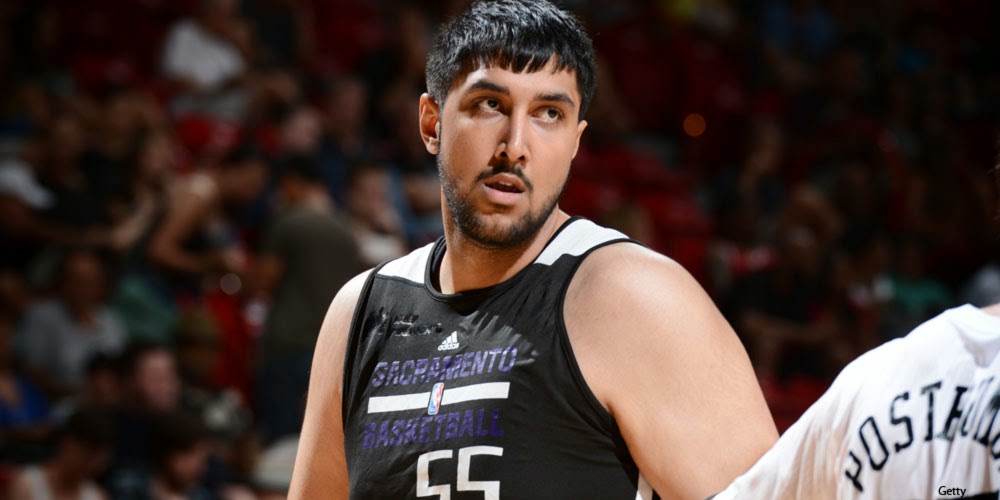 Up by three points with less than four minutes to go in their Preliminary Round game against China, India were on the cusp of history. If India could hold on to their lead, it would give them their first victory over Asian giants China in over 70 years of international competitive basketball.

Held in Wuhan, China this year, the FIBA Asia Cup featured nine or ten of the top teams of the continent. China had chosen to field mostly a second-string roster for this tournament, but nevertheless, they featured many players (like 18-year-old NBA prospect Zhou Qi) who would have a role in the upcoming Chinese Basketball Association (CBA) season. The Indian national team had no basketball professionals. A win over China – weakened squad or not – would be unprecedented.

Meanwhile, back home in India, hardly anyone knew of this game or the tournament at all. Basketball is a niche sport in a country of 1.2 billion people – the world’s second-largest population after China – most of whom weren’t even aware if India even had a basketball team. Beyond cricket – which is India’s most-loved and nearly-exclusive national pastime – there is much ignorance among the general public about the country’s exploits in other sports. This ignorance unfortunately extends to the larger Indian diaspora across the world too, from the United States and Canada to Britain and Australia.

“Do Indians even play basketball?” many wonder.

Back over in Wuhan, the 12 Indians of the national squad were playing basketball all right. After decades of 20, 30, 40, or 50 point losses to China in the past, here was an Indian team suddenly confident to be within close grasp of the impossible. They had blown a double-digit early lead already, fallen behind to the Chinese in the second half, and then bounced back again. Now, the score read 55-52 in India’s favour, with 4:07 remaining in the final quarter.

Limited to mostly Asian tournaments over the past few decades, the Indian team had been minnows against the continent’s giants, happy to compete for participation points rather than any medals. India’s current FIBA world ranking (61) sees them trail behind the likes of the Virgin Islands and Cape Verde, two countries with a combined population of a little more than Dehradun, India’s 76th most populous city. Despite some baby steps towards recent improvement, India have also made a habit of dramatic late-game breakdowns. A late three-point lead over China, in China, felt more like a house of cards ready to collapse.

While India tried to survive those remaining four minutes, thousands of kilometres away in the Western Hemisphere, there were a couple other Indians flirting with history. Last year, Mumbai-born Vivek Ranadive had become the first Indian majority owner of an NBA team when he purchased the Sacramento Kings. While Ranadive’s Kings struggled on court, the software tycoon focused on pushing the team’s brand off-court in his attempts to tie in his team with the country of his birth and use his unique opportunity to make the Kings into “India’s Team.” 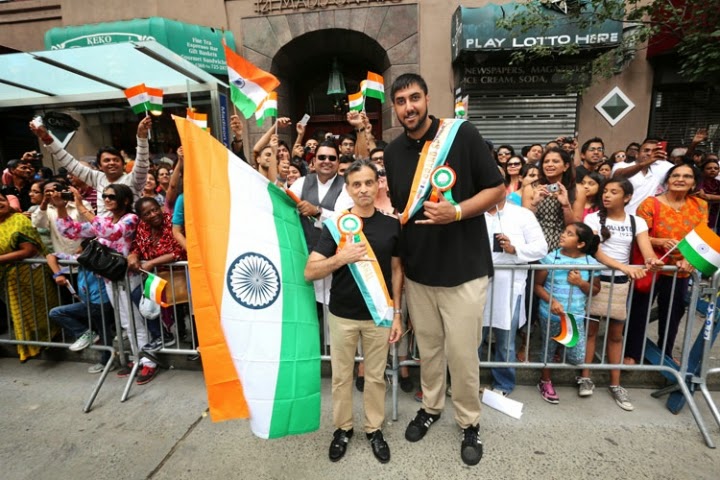 Meanwhile, a Canadian born to Indian-immigrants in Ontario grew to become a 7-foot-5 inch behemoth and win a couple of back-to-back Western Athletic Conference (WAC) tournament MVP awards in two years at New Mexico State. This giant – Sim Bhullar – declared for the NBA draft, went undrafted, and was promptly picked up by Ranadive’s Kings for their Summer League squad. Coincidently, on the same day that India played China in Wuhan, Bhullar made his Summer League debut for the Kings against the Hornets in Las Vegas.

A month later, on the same day that India celebrated its 67th Independence Day, the Kings announced that they had signed Bhullar to a contract, officially making him the first player of Indian-origin in the NBA. With one signature, a racial barrier had been broken in the league and the Kings had taken another calculated step towards their outreach to India.

Ranadive stressed the importance of Bhullar’s cultural heritage and its influence on the Indian audience. “I’ve long believed that India is the next great frontier for the NBA, and adding a talented player like Sim only underscores the exponential growth basketball has experienced in that nation,” Ranadive said in a press release, “While Sim is the first player of Indian descent to sign with an NBA franchise, he represents one of many that will emerge from that region as the game continues to garner more attention and generate ever-increasing passion among a new generation of Indian fans.”

Over the past year, Ranadive’s Kings have hosted Indian-culture nights, launched the NBA’s only Hindi-language website, and even released a classic video reaching out to Indian fans to vote DeMarcus Cousins into the past All Star Game. Ranadive also expressed his desire to take the Kings to India for the NBA’s first-ever exhibition game there.

Blake Ellington, an associate editor with sactownroyalty.com, spoke to me recently from the perspective of Kings’ fans about the team’s ‘Indianization’, “Sacramento is a small market and Kings fans enjoy it when the team is on national television or involved in things like Vivek's efforts to expand the NBA into India,” he said, “The Kings held a Bollywood Night last season and the fans were exposed to some elements of Indian culture, and they seemed to have a good time with it… I think Kings fans do have sort of a kinship with India now.”

Just days after his signing was made official, Bhullar joined Ranadive to headline the largest-ever ‘India Day’ parade through New York City. While two other members of the Sacramento Kings – DeMarcus Cousins and Rudy Gay – headed off to Spain to represent Team USA internationally, Ranadive and Bhullar were globalizing the Kings by reaching out to the Indian community in Sacramento, India, and worldwide.

On-court, the 21-year-old Bhullar – who will be the NBA’s tallest player next season – is still a work on progress. It would be unlikely for him to get an opportunity to be anything more than a fringe contributor in Sacramento, but he has the ambitions to prove his doubters – many who believe that he was signed for business rather than basketball reasons – wrong.

“I just wanna get better,” Bhullar told me in an interview a few weeks ago, “I want to change my game to fit the NBA game. I want to get more comfortable with the league and prove all those who doubt me wrong. I’ll respond to [the critics] by just producing, by just doing what I do.”

Ellington believes that Bhullar still has a way to go before becoming an impact player for the Kings this season. “He isn't quick enough (at the moment) to compete with NBA-level players – we saw that on display in the NBA Summer League. He will probably get an opportunity to play on the Kings' D-League affiliate, the Reno Bighorns. This will be good experience for him and maybe with some extended playing time there he will work himself into a spot where he could get some minutes on the Kings roster… So is it cool that the Kings signed the first NBA player of Indian descent? Absolutely. Do I expect him to do much for the Kings this season? No.”

Off-the-court, Bhullar’s impact in India will be felt if he truly can become a role model to a people who need a basketball star to inspire the next generation. Indian basketball players – in India or abroad – rarely made the jump into mainstream consciousness. The best players in India’s national squad like Amjyot Singh, Amrit Pal Singh, or Vishesh Bhriguvanshi are barely recognized outside the small, core basketball circles in India. Success for Bhullar could promote the Kings and the NBA in India, and if basketball gets more popular in the country, the spotlight could also shift on the exploits of India’s own star players.

But for a brief moment in July, those star Indian players did enjoy their moment in that spotlight. India had played inspired defence to keep the Chinese at bay. And now, with a little over four minutes left on the clock, Bhriguvanshi dribbled the ball across the three-point arc. He had locked eyes with the athletic Amjyot Singh, who – aided by two picks from his teammates – found a clear lane to the rim. Bhriguvanshi lobbed the ball up high to the inside, and Amjyot caught it and slammed it down to give India a five-point lead. The alley-oop ignited the entire Indian bench, as the players screamed and threw their towels up in celebration. The home crowd were shell-shocked in silence.

India survived the last three minutes of the game with a couple more clutch plays on both ends, and when the final buzzer sounded, India had won 65-58. Head Coach Scott Flemming (formerly an assistant with the NBDL’s Texas Legends) had led India to the unthinkable: a basketball victory over China. The overall performance – capped by Amjyot’s electrifying clutch alley-oop finish – were the product of an unfamiliar, confident Indian side, a squad that casually brushed away decades of failure to announce the coming of a new India.

For once, both mainstream and social media in India took notice, the news trended on Twitter and went viral across the nation. Only success and hype can capture the attention of the notoriously-fickle Indian audiences, and India’s success at Wuhan displayed a small fraction of basketball’s potential to Indians if it is developed and promoted the right way. 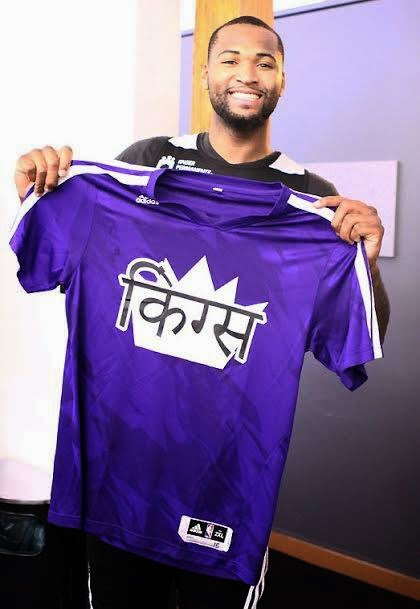 In a country of over a billion people, even that small fraction represents a number in the hundreds of thousands. It is these hundreds of thousands – or millions – that Ranadive and the NBA is counting on to turn into basketball’s next kingdom. China is famously the world’s largest basketball market, with some estimates counting around 300 million hoop fans in the world’s most populous nation. As the Chinese market gets more saturated, India presents a tantalizing new face for the sport.

“What Yao Ming did for China, we hope players like Sim will do for India,” said Ranadive at the Summer League, “I have this vision — I call it NBA 3.0 — where I want to make basketball the premier sport of the 21st century.”

While he strives hard to get in shape and improve his eventual on-court impact, Sim Bhullar’s broad shoulders will also be carrying the hopes of the South Asian (or desi) basketball community across the globe. This is a heavy burden on a 21-year-old NBA rookie who is only looking to secure his professional future and make a place for himself in the world’s toughest basketball league. But so far, Bhullar has responded to this extra responsibility with great aplomb.

“I don’t feel any pressure,” Bhullar said, “I grew up in Ontario, Canada, and my parents came from India. I know that all the hard work that has been put leading up to this situation has paid out. I wanna be a role model: hopefully, I’ll get to see four or five more Indian-origin players in the NBA; that will be a great feeling!”

“Do Indians even play basketball?” they ask. Hopefully, Bhullar’s journey, coupled with the success of other Indian basketball players, can put to rest any further questions.