The official draw for the 3x3 basketball tournaments at the 4th Asian Beach Games was completed on Tuesday, September 9: India's Women will be setting out to defend their gold medal clinching performance at this tournament two years ago. India's Men's side - who won gold in 2008 but finished fifth in 2012 - will also be taking part with hopes to bring back some silverware.

The 4th Asian Beach Games are set to be held in Phuket (Thailand) from November 14-23, 2014. The 3x3 basketball tournament at the games - which will be played at Karon Beach - will be held from November 15-18. 15 Men's teams and nine Women's teams are schedule to compete for the basketball medals. 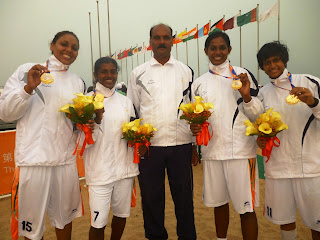 The top two teams from each group – in both sections – will qualify to play cris-cross Semi-Finals.

India's women shocked hosts China at the 3rd Asian Beach Games in Haiyang by winning the gold medal game two years ago. It was an undefeated run by Indian eves who won all five of their games including a thrilling comeback victory over the hosts. Geethu, Anna Jose and Anitha Paul Durai scored the crucial last points to give India the final victory. India’s Men’s squad finished the tournament 5-1 at fifth place.