The Mercury were the WNBA's best team all season, led by the All Star trio of Taurasi, Candice Dupree, and sophomore Center Brittney Griner, who was the number one pick in the WNBA draft the season before last. The Mercury finished with a WNBA-best 29-5 record in the season, finishing at first place in the Western Conference. They swept pass the Los Angeles Sparks in the First Round of the playoffs, beat the 2013 champions Minnesota Lynx in the Conference Finals, and handled a tricky Sky squad with relative ease in the Finals.

Despite finishing fourth in the East, the Chicago Sky upset first-place Atlanta Dream in the First Round and then beat the Indiana Fever in the Conference Finals. 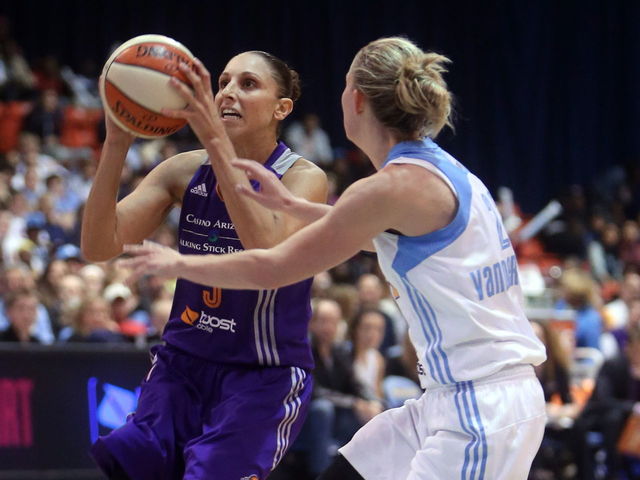 Griner's presence helped the Mercury win Game 1 and 2 of the WNBA finals over the Sky by an average of 25 points each. But Griner was ruled out of Game 3 as a result of the eye injury she sustained in Game 2. Taurasi took matters into her own hands, scoring 24 points in the decisive Game 3, and aided by 24 points by Dupree, helped hold off the Sky. Taurasi was named the Finals MVP.

This was Taurasi's third title - all with the Mercury - and her second WNBA Finals MVP award. She added this accolade to her WNBA MVP award, her five scoring titles, seven All Star appearances, three NCAA national championships, three Olympic Gold Medals, and a FIBA World Championship for Women gold.

Minnesota's Maya Moore, who was the leading scorer in the regular season in the league, was the 2014 WNBA regular season MVP.
Posted by KARAN MADHOK at 14:16