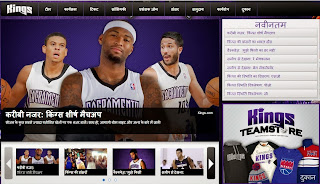 The Sacramento Kings - recently bought by Indian-born software mogul Vivek Ranadive - have become the very first NBA team to launch a website for the team in Hindi, in an effort to connect closer with fans in India.

The site - Kings.com/Hindi - went live recently as the next step in an ongoing process by Ranadive to bring the team closer to 'home'. At this point, most of the content on this site are introductory articles about various Kings players and a look-ahead at their first matchu-ups of the season. In addition, the website has highlighted the recent visit by the Sacramento Kings cheerleading team to India for the NBA Jam.

"A key facet of our ownership group's vision is for the Kings to become India's home team," said Kings President Chris Granger. "Between our dance team performing in India this summer, a live telecast on Sony Six for our home opener, and the launch of the website, we are committed to reaching out to India, and all of Asia, in a comprehensive way. This is just the beginning." 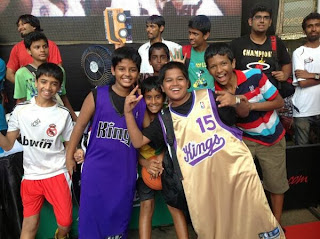 NBA teams having multilingual websites is of course no new thing. The Warriors and the Heat have websites in Chinese already, while the Heat also have a Spanish language site. But the Kings have become the first to break the language barrier for the Indian audience that is more comfortable reading in the Devanagari script.

Many Indians with access to technology and the internet are of course comfortable with reading, writing, and conversing in basic English (thanks a lot, colonization), but Hindi content will definitely open up the access to many more. Internet access is slowly beginning to reach all strata of Indian society, and many more major websites around the world will start to produce Hindi content for their new viewers. The NBA - and particularly the Kings - are just ahead of the curve with this one.

That said, a lot of the Hindi content of the website simply reads as Google Translated and unedited versions of the English writing. And as we all know, translating every single word and phrase can sound a bit weird: 'shuddh' (शुद्ध) Hindi has many words that even the best speakers struggle with a little, and many Hindi speakers/readers just use English words for several words/phrases anyways.

Ranadive became the first Indian-origin majority owner of an NBA team during the summer when he purchased the Kings and helped them remain in Sacramento. Since then, he has taken various steps to reach out to his homeland. He spoke about bringing the Kings to India for an exhibition game next year. The Kings' first game of this upcoming season (versus the Nuggets) is also going to be telecast live in India in what Ranadive hopes can become "the biggest opening night in the history of the NBA." Sacramento Bee writer Ryan Lillis also revealed that a cricket field was going to be set up next to the Kings' Sleep Train Arena in Sacramento for opening night, as a nod to Indians in the area. Before joining the Kings' ownership, Ranadive was a minority owner with the Warriors, where he organized "Bollywood Night" for three consecutive seasons.

The Kings' efforts will definitely arouse some interest and curiousity in the short term, especially amongst fans in India who are still novices to the NBA. I say that because most hardcore fans of the game in the country already have their favourite teams and players, and if you found me one Kings fan in a group of a 100 I would call you a liar. A Hindi website isn't going to turn a Lakers, Heat, Celtics, Bulls, Thunder, or Spurs fan to suddenly gain respect for Greivis Vasquez's court-vision or Marcus Thornton's range.

But like many other NBA situations, one man can change it all. Kevin Durant created fans for Oklahoma City, Kobe Bryant has people caring for the Lakers, and LeBron took a whole bandwagon from Cleveland to Miami. The man responsible for long-standing fame and interest in the Sacramento राजाs will be none other than DeMarcus Cousins. Cousins is a lot of things - good and bad - and will infuriate fans just as much as excites them. But he does have the raw potential in turning into one of the best big men in the league, and if he is ever able to take that step, he will make the Kings exciting enough to devote a Bollywood love song to.

Until then, new Kings fans in India will have to settle for game recaps of losses every night. Now available in Hindi. Go राजाs!
Posted by KARAN MADHOK at 14:13