China are undoubtedly the most feared basketball team in Asia – and while recent history has seen them stumble against other rivals in Asian tournaments – they have showcased that their future is set to be as successful as their past. A new crop of youth Chinese players continued the country’s dominance at the 2013 FIBA Asia U16 Championship, and with their 26th consecutive win at the tournament, brought home the gold medal against Philippines on Friday. The tournament, which was held at Tehran (Iran) from September 24 to October 4 featured the young talents that are set to alight Asian hoops on fire. 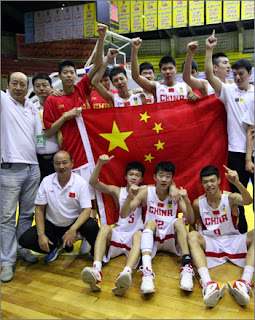 India were amongst the 14 teams that took part in the tournament, and despite some encouraging individual performances, failed to improve on their standing at the championship from 2011 and dropped one spot to 11th place.

Although China outlasted the Filipinos in the final, the 85-78 margin was their lowest margin of victory in the three editions of the U16 tournament. Led by Yanhao Zhao (25) and Hao Fu (22), China maintained a short lead through the course of the game, and although the Philippines came close, they could never come close enough. Jose Mendoza scored 20 points for the Philippines, who had to settle for the silver medal.

On Friday, Japan took a big lead in the first half to cruise to a 85-72 victory in the bronze medal game over Chinese Taipei. Hayato Maki (23) and Rui Hachimura (21) did most of the offensive damage for the Japanese. Cheng-Shun Hsu led Chinese Taipei with 18. 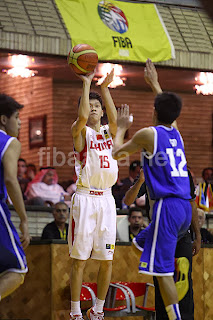 The tournament’s semi-final stage, a day earlier, presented some exciting rivalries in the matchups. China had no problem swatting away Japan for a 99-78 win behind Yanhao Zhao’s 32 point burst. Jinqui Hu added 22 for the winners, while Rui Hachimura (25) and Yuto Nomi (16) had been Japan’s leading scorers. The second semi-final was a close fight to the finish, as the see-saw battle saw the Philippines lose their halftime lead and then come back to defeat Chinese Taipei 77-72 in dramatic fashion. Heroics by Jose Mendoza (28) and Michael Nieto (17) made the difference for the Philippines.

Two years ago, India showed some promise at the U16 FIBA ABC, when, armed with the talents of 7-foot teenager Satnam Singh Bhamara, they gave troubles to several Asian powerhouses and finished at 10th place. Bhamara stood out as one of the tournament’s leading scorers and best individual players. All of the players from that team had moved on to make room for a fresh group of youngsters. Although India couldn’t improve on their previous standings, they saw another individual bright spark emerge – Rajasthan’s swingman Mahipal Singh – who was unstoppable through the course of the championship and finished as Asia’s top scorer with an average of 25 points per game. The Indian squad – led by coaches Tritesh Guha and Raghuvendra Singh Gaur – can consider themselves unfortunate as they lost two games to overtime heartbreaks during the course of the tournament.

India were drawn in Group B in the Preliminary Round of the tournament, along with Jordan and Japan, and Mahipal Singh was determined to help the team get off to a good start in their first game against Jordan. India held on to a six point halftime lead, but Jordan began to slowly chip away in the second half and came back to tie the game by the end of regulation. They continued their momentum in the high-scoring overtime period to defeat India 100-97. Khaled Abuaboud (25) Mohammed Daher (21) and Zaid Albattikhi (16) led the way for Jordan’s comeback victory. Mahipal led India with 25 points, while Ashish Briggs (21) and Akhilesh Kumar Tudu (16) added to his efforts. 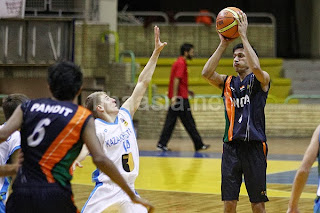 India were always slated to face an uphill battle against Japan in their next game, but they surprised many onlookers with a respectable performance. After losing a lot of ground in a bad second quarter, Mahipal’s 35 point outburst helped India remain neck to neck with Japan till the end, but it wasn’t enough as they went down 85-71. For Japan, Hachimura (19) and Nomi (19) kept the ship steady in the victory.

Since there were only three teams in India’s group, they automatically qualified for the Second Round Group F. Chinese Taipei led India by 16 at halftime. A second half comeback attempt – led once again by 34 points by the brilliant Mahipal Singh – still left India on the short end of the 80-69 final score. Yej-Ju Wu (21) Yung-Cheng Sun (17) and Chien-Chih Huang (16) led Chinese Taipei.

India finally got their first win of the tournament, and it came in thrilling fashion against Kazakhstan. After a tight first half where Kazakhstan held to a two point lead, India came roaring back in the third quarter to double the Kazakhs output 22-11. But Kazakhstan didn’t give in easy, and a strong fourth quarter saw them reach perilously close to India again. In the end, 22 points by Mahipal and 16 points by bench player Sunil were enough for India to scrape away with a 68-65 win. 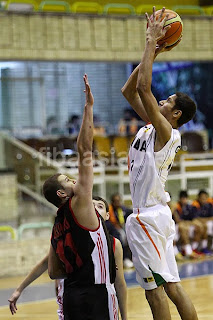 India played against the Philippines in the last Second Round game, and once again, trailed only by a small margin at halftime. But this time the third quarter didn’t go their way, and the Philippines offense exploded for 31 points in the 10-minute period. Jose Iv Go was unstoppable for the Philippines, high scoring the game with 26 points, while Nieto added 16. In the end, India had displayed that they could hang close with Asia’s best, but still lost 78-67.

Out of the reckoning for a Quarter-Final spot, India had to contend to play in the 9-12th place playoffs. They started badly in their first game against Malaysia, totaling just 24 points in the first half. But India turned on their defense in the third quarter to hold Malaysia to just eight points, and set up the scene for a thrilling final period. In a back-and-forth finish with many heroics, it was Rahul Mehla who hit two crucial free throws in the dying seconds to send the game into overtime. But once again, India came up short in the extra period, and Malaysia held their nerves for a 82-80 win. Malaysia’s Zi Fueng Chang and Mahipal Singh dueled in a memorable shootout, totaling 26 points each. Ting Jun Foo added scored 18 and Koon Wei Chong added 16 for Malaysia. Jaipal Singh Maan made the most of his added minutes to end with 17 points for India.

India had to settle for 11/12th place matchup in their final game against Syria, and they dominated the first three quarters to comfortably finish with an 81-67 win. 19 points and nine rebounds by Mahipal once again led the way for India. Syria’s captain Ronaldo Shammas had 22 in a losing effort. 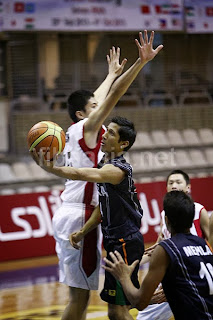 India ended the tournament with a 2-5 record and at 11th place.

It was mostly a one-man show for India through the course of the championship, with Mahipal Singh the only player averaging double digits in the scoring section. The over-reliance on Mahipal may have helped keep India competitive in many games but also made their offense at times quite predictable.

Although the team’s efforts have improved, the final standing was a step backward. India’s youth still have to fine tune several things to turn those close losses into victories. It’s not always as easy fix, since other teams are fine tuning and improving too. But we hope that at least the experience of participating in this tournament can instill some confidence in these youth players for better performances ahead.
Posted by KARAN MADHOK at 09:22