“When the season comes, I’ll be ready.” Derrick Rose returns to continue his legacy


This article was first published as the cover story in the 116th edition (2013 - No. 19) of SLAM China Magazine. Here is my original English version of the story. 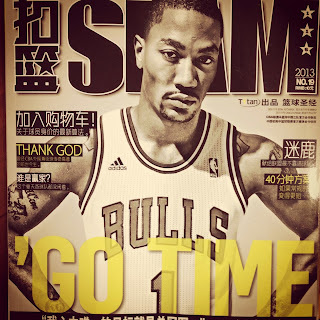 Two years ago, Derrick Rose was amongst the best players in the NBA, enjoying his status as the league’s youngest-ever MVP at 22 and carrying the defense-first Bulls to the best record in the NBA. He had a turbo jet in his game, zooming past defenders to dominate any contest and zooming up the NBA charts as he gained the respect of his competitors, popularity from across the world, and accolades in his trophy cabinet.

And then, quicker than the breakneck speed of his rise to NBA dominance, his promising career seemed to be shot down. An injury in the first playoff game from last summer revealed a torn ACL in Rose’s left knee. The injury forced him to miss the rest of the 2012 playoffs, and then the rehab of his surgery over the following offseason kept him out of action through the course of the 2012-13 NBA season.

During a spring of intrigue where everyone from the media to fans to coaches and rappers pondered if Rose would suit up for Chicago’s playoff run, the man himself stayed silently glued to the bench, choosing instead to prolong his return and keep anxious fans – as well as skeptical critics – waiting for his comeback.

Spring turned to summer and summer gave way to the fall, and lo and behold, the new NBA season has suddenly inched so much closer towards us. And the start of the new season will bring back a welcome sight to eyes of Bulls fans around the world: Derrick Rose will finally suit up. He is scheduled to play in the pre-season and, if all goes well, will be in the lineup when the Bulls tip off their season in Miami against the reigning champions, who will be receiving their championship rings. 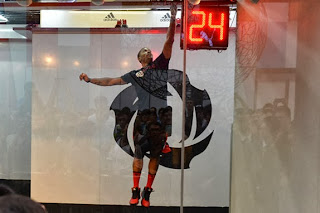 In this journey, from a heart- breaking injury to a career-suspending rehab, and months of criticism for his decisions, Rose may have suffered through a lot over the past one and a half years. But now, on the verge of his return, the only thing that he had to suffer through was addressing the same questions from the curious Beijing media.

“Can you play?” “Will you change your approach to your game?” “Will you be as good as you used to be again?”

Rose was in China at the tail-end of his Asia promotional tour, and he calmly answered each query about his health, his future, and his rehab process.

“Rehab was pretty difficult,” Rose said, “The hardest thing was getting over the mental part, the part of wanting to play and not being able to, of not having the patience to sit out. But my son helped me through everything right now. When I’m having tough days being around him helps me get through those days. Just being around him brightens my day. Just knowing that he’ll be one of those people who’ll always be by my side.”

For Rose, rehabbing his knee also meant knowing the right time to feel physically and mentally ready to take the court again. During the Bulls’ playoff run last season, reports emerged that Rose had been cleared to play, was dominating in practices, but didn’t feel ‘mentally’ ready to take his chances in a high-stakes NBA contest yet.

“I knew I had to take my time,” Rose told SLAM, “I knew it was going to be a long process. I wasn’t going to force it. I look at the past players who forced coming back too soon and had the pressure to come back too soon – I learnt from their mistakes. I’m 24 and I know I have a long career ahead. I’m not done with what I wanna do in the NBA. I didn’t want to rush anything. I knew that, no matter what, my teammates and my coaches were there supporting me.”

And while he waited and rested on the sidelines, Rose turned the curse of the injury and the rehab into a gift for the future. “Having this injury, I look at it as a blessing,” he said, “I watched the game, became a better leader with my teammates, became more vocal. I think it will be better for us as a whole team. Rehab made me a smarter player. Being in the sidelines last season, it was the most I’ve ever actually watched basketball in my life! When I’m playing, I don’t watch the game off the court at all. But when I was recovering from the injury, I had time to watch and learn how the game is played: watch the coaches, the plays, and the systems around the league.”

Rose will get a chance to finally showcase his new-found approach in a few months. And he feels upbeat about his chances. “The knee’s feeling good,” he said, “I think I’m a 100 percent. I’ve been a 100 percent for a long time. I want to stay on script with my training and I know that the day is coming when I have to step back on the court and have people judge my game from all across the world. I have to be ready and be prepared; I’ve been preparing myself for this since the day after my surgery.”

The league has changed a lot in the past 17 months, since Rose was last seen on a basketball court. LeBron James and the Heat have won two championships. New contenders have risen in the Eastern Conference, including the Pacers, the Nets, and the Knicks. And although the Bulls have remained steady with their core, a few young faces have emerged in Tom Thibodeau’s squad. Rose believes that Chicago’s consistency and continuity will help give them the advantage in the year ahead. “I think that we could be at real contender for the title,” he said, “We have a core group that’s been together for three-four together. I think that’s more than any other starters in other teams in the NBA. We’ll have great team chemistry that can be a huge advantage for us.”

Rose will be back as the centerpiece of that team, and will once again be asked to be Thibodeau’s extension as the leading point guard on the floor. But fans will wonder if the player – once known to one of the league’s quickest and athletic talents – will return to his explosive style of play after the injury again.

“I won’t change the way that I attack,” he clarified, “That’s my whole game – me being aggressive, that’s just the way that I play. I just want to be more efficient and have more control over the whole game. I’ll just be playing the same way but with a lot more confidence. When I get out there, you’ll be able to tell that I’m way more aggressive and efficient with my game.”

“As a leader, I have to be more vocal with the team next season, make sure guys practice hard every day, stay focused, and remind them why we’re there. The goal is to win a championship.”

Rose projects two different, conflicting energies at the same moment. On the face he seems calm and collected, moving gracefully with no hint of discomfort from the injury that robbed him of a season two years ago. But from the inside, he speaks with a fiery determination that seems ready to take on the league’s finest again and rise to the top.

“When the season comes, I’ll be ready. Next season, my personal statistics could be whatever. Four points per game, anything… I just want to win. I have only one goal for next season, and that is to win a championship. As for my legacy, the only thing that I’m missing is the trophy. I know that I’m one of the hardest working – if not the hardest working – players in the NBA. That’s why I will be very confident returning back on court after the rehab.”

The career seemed to be perfectly scripted. After phenomenal success in high school and college, local boy gets drafted number one by his hometown favourite team. He is rookie of the year by his first season, an All Star by the second, and an MVP by the third. And as he grows into a more complete player, he completes that legacy by bringing a championship back to his hometown team.

And if all goes well, the injury and the rehab that kept Derrick Rose miserably out of action for over a season will seem more than a minor blimp than a career-ender in the long run. For Rose, the future is bright, and he can dream ahead of continuing the perfect script ahead.

“I want to win a lot of championships. But it will take a lot of time, a lot of hard work, dedication, and sacrifice. Those things aren’t just handed out, you have to earn them.”
Posted by KARAN MADHOK at 09:30