An NBA exhibition game in India next year? Vivek Ranadive & the Sacramento Kings surely hope so...


Indian-born software mogul Vivek Ranadive killed many birds with the same basketball-shaped stone earlier this year. When Ranadive's majority-owned group bought the Sacramento Kings, he succeeded in saving the Kings from Seattle to keep them in Sac-Town, he brought hope and optimism to a franchise struggling on court and with its fanbase, and, most relevant to desi fans, he became the first majority Indian-origin owner of an NBA franchise. Ever since then, the tech billionaire has brought back some positive vibes to the Kings, planning for a new arena, hiring new Head Coach Mike Malone, completely reinvigorating management and staff, drafting Ben McLemore, trading away former ROY Tyreke Evans, motivating their centerpiece DeMarcus Cousins (and giving him a contract extension), and turning 'Sac-Town' to 'Shaq-Town' by welcoming once Kings-tormentor Shaquille O'Neal into the franchise's ownership group. Excitement over the new ownership has helped the Kings surge to the number one spot in the NBA in new ticket sales. 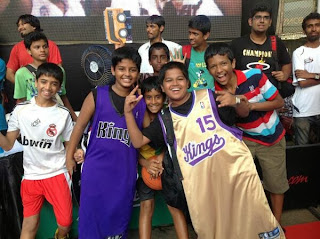 But Ranadive isn't done yet. The Mumbai-born has spoken various times of turning the Sacramento Kings into a 'global brand', and specifically about popularizing the team back in his motherland. He wants to set up outreach programmes to connect with Indian fans and even added that he wants DeMarcus Cousins to be a household name in India (for all the right reasons, hopefully).

How is he planning to achieve all this, you ask?

By bringing the Kings - physically - to India. On NBA.com, Scott-Howard Cooper wrote yesterday that the Sacramento Kings have already started talks with the NBA and with officials in India about playing an exhibition game in Ranadive's native country as early as next season.

Next season? As in by the end of 2014. As in about a year from now. Ranadive mentions that finding a place to play would indeed be a challenge - "We have to find the right facility," he says, "Right now they don’t have one. But we have a year and the NBA is very, very supportive about building the brand in India." - but he seems to be fairly optimistic at this point. 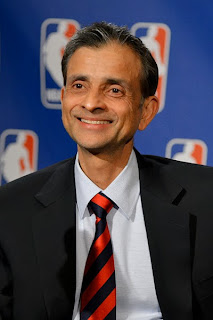 Now I have been to very many basketball stadiums around India in recent years (I use the word stadium, and not arena, purposely), from Ludhiana to New Delhi, from Raipur to Nagpur to Mumbai. There has indeed been a recent positive surge in the construction of decent public indoor stadiums around the country. Until very recently, most of the biggest basketball tournaments in India - even the biggest national-level competitions - were held outdoors on shoddy courts with shoddier rafters. That trend has been thankfully changing. Over the last few years, nationals - of all age sub-divisions - have been held in indoor courts, in Cuttack, Patna, Kolkata, Delhi, Bangalore, and more. Chennai's Jawaharlal Nehru Stadium even hosted the 2009 FIBA Asia Championship for Women, and it is perhaps the most advanced government basketball facility in India at this point along with the Talkatora and Thyagaraj stadiums in New Delhi.

But even our best, most advanced basketball facilities are a far cry from the high standards that the NBA expects. The NBA has been to Asia several times for pre-season games of course, mostly in Japan, China, and Taiwan, and this year, for the first time to the Philippines. China will once again host the 'NBA China Games' matchups in Beijing and Shanghai, bringing the Lakers and the Warriors to their shores this year. China has several international-quality basketball arenas around the country, all of which are a major upgrade over anything India has to offer, and many are used by the Chinese Basketball Association (CBA) teams. But most of these international-level facilities would still fall below NBA requirements, and only a handful of Chinese arenas - in Beijing, Shanghai, and Guangzhou - have lived up to the NBA expectations so far.

All this adds up to reiterate that the NBA has very high expectations. The courts must be perfect to NBA-quality surface, NBA-quality backboards, rims, and nets. The balls provided must be the type that NBA players are comfortable with. The arena must be have adequate security for the players, the staff, and the fans. The arena must be clean. The fans should have comfortable seats from courtside and all the way up to the top. All the entrances and exits must be clearly marked. There needs to be check for fire hazards and escape. There needs to be the technology - the hardware and the software - to run the scoreboards, timers, and more. There must be clean, comfortable, and high quality locker rooms with good facilities for the players. And of course, dozens of clean restroom facilities for the thousands of attending fans. There needs to be a way to control big crowds arriving and leaving such an event. And so much more. 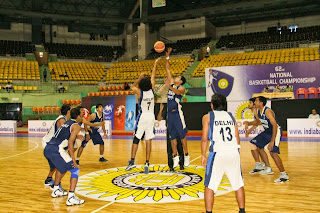 These are a lot of expectations to produce anywhere in India - even if it's just for one stadium to turn into an NBA-level arena - over one year. No stadium in India has the type of court, facilities, security measures, or technology that could sniff at NBA standards. Most of the best courts are perhaps in private schools, colleges, or clubs, but even they might not be good enough (or large enough) to handle an NBA game anytime soon.

New Delhi hosted the CommonWealth Games in 2010, and once you look past the deplorable concerns and controversies associated with these Games (there's a whole Wikipedia page dedicated to these controversies), you could conclude that, at the very least, many of the sporting facilities in Delhi were given a major face-lift. A lot of new facilities were built (many of them are going to waste now, but that's another issue for another day) and many of them resembled international-level infrastructure during the course of the Games. And yet, even facilities that satisfy the Commonwealth organizers (or the IOC, or FIBA) may not be up to NBA standards.

And even if a NBA-quality facility is built in India over the next 12 months, would the cost of it be justified? Outside of the elites, very few average Indians would be able to afford an NBA exhibition, unless the costs are slashed heavily, and in which case, the investors of the entire project would be suffering a devastatingly heavy loss.

The NBA continues to break boundaries and reach new borders, and every year, they take teams for exhibition and regular season games to more and more nations around the world. I understand the urgency for Ranadive, the Kings, and the NBA in general to set sight on India as it's next big market, after China. India has 1.2 billion people, and even one percent of that audience buying into the NBA would make the entire effort into a success. But India is a complicated place: our minds may evolve to accept and love the NBA, but just like everything else, the infrastructure might take a lot longer to catch up.

In an interview with Jared Greenberg on NBA.com recently, Ranadive spoke in further detail about the potential of a future basketball revolution in India:

"Cricket will always be the national pastime in India," Ranadive said, "But if basketball can be a strong second, I think it will be an important step towards my vision of NBA 3.0, making basketball the premier sport of the 21st century. It's already become the fastest-growing sport in India. Following our purchase of the Sacramento Kings, there has been a lot of publicity, thanks to the NBA as well. It's the kind of sport that can be played in a poor country like India; it can be played by one person, by a few people, by boys, by girls, in villages, in cities, you don't need a lot of space for it like you do for cricket. So I fully expect it to be very very popular. Also, Indians love numbers, and there's a lot of numbers associated with basketball! So I think in about 10 years [the sport] will be a huge phenomena in India."


This is a man who came to USA with 50 dollars in his pocket and turned it into a billion and bought himself a basketball team, so we would be foolish to bet against him. I applaud Ranadive's outlook and his mission to make India the next big avenue for basketball, and thus, help the game itself become the 'premier sport of the 21st century'. But an exhibition game next year might be a dream too big, too soon.