32 Boys and 31 Girls of the Indian Youth (under-16) division have been called up for a coaching camp to be held at the KD Jadhav Indoor Hall in New Delhi from June 15th – July 29th. A selection committee of the Basketball Federation of India (BFI) have selected these probables based on their performance at the 28th Youth National Basketball Championship for Boys & Girls in Nagpur from May 26th-June 2, 2011.

In addition to the players selected from the Youth Nationals, the eight Indian youngsters currently getting training at the IMG-Academy in Bradenton, Florida (USA) have also been invited to the camp in New Delhi. 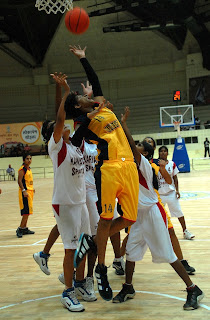 Definitely some interesting young players on the list - several of them have been in the fray for a while now, and a few made their mark at the Nagpur Youth Nationals recently.

First off, these are the kids who are at the IMG Academy in the USA, and will definitely be playing at the highest level because of their training and competition level - Boys: Satnam Singh Bhamara, Sanjeev Kumar, Dinesh Mishra, and Ashiv Jain. Girls: Barkha Sonkar, Pooja Ambishta, Soumya Babbar, and A. Kavita. These eight kids have been studying and playing there for almost a year now. The standout name amongst them is obviously of 7 foot 1 youngster Satnam Singh Bhamara, who, with his combination of size, skill, and youth, has become the Big Indian Basketball Hope.

Amongst the girls, the other star youngster is Maharashtra's Shireen Limaye, who is also the youngest player to be called up for India's Sr. Women's camp. Highly experienced at her age, Shireen will be one of the superstars of India's U16 Girls' squad.

Other players who had impressive outings at the Nagpur Youth Nationals are Kerala's Poojamal, who scored 40 points to go with 13 rebounds to lead her team to a gold medal win in the Girls' final, Chhattisgarh's Anjana Ekka, Maharashtra's Sruthi Menon, and Haryana's Rimpy Hooda. 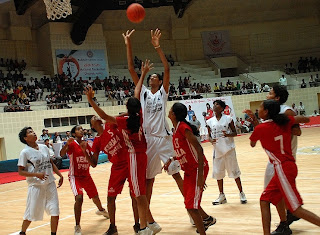 One of the most interesting names in the girls' probables is of Poonam Chaturvedi, who at 6 foot 6 inches, is India's tallest female basketball player, and is still almost a month short of her 16th birthday. Originally from UP, Chaturvedi played for Chhattisgarh at the Youth Nationals, and despite her inexperience, was a major force in helping her team bag the silver medal.

In the Boys' list, there are several players from the gold winners Delhi, including Akimjeet Singh Sohal, Narendar, and Pradeep Kumar. Runners-up MP are represented by 3 players, including Syed Anam Ali and sharpshooter Shubham Mishra. Punjab's high-scoring 'Singh duo' of Loveneet and Kushmeet will also be attending. Other impressive performers were Akash Bhasin (Chhattisgarh), Saleem Ibrahim (Maharashtra), and Rakesh Sangwan (Haryana).
Posted by KARAN MADHOK at 12:02