With new indoor stadium, Nagpur looks to become a major centre for basketball in India 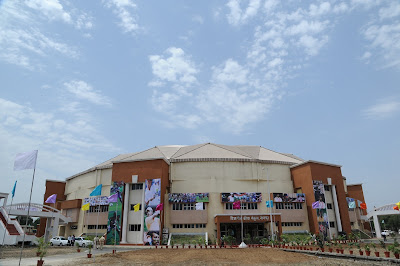 Less than six kilometers away from this milestone is another important landmark, another place where the rest of India is starting to slowly converge. This place is Nagpur’s brand new Indoor Basketball Stadium of the Divisional Sports Complex, and this week, this court in Nagpur has welcomed young Indian basketball players from all four corners of the country – from Jammu and Kashmir to Kerala, from Gujarat to Manipur – a total of 24 boys’ and 23 girls’ teams from different states are taking part in the Youth National Basketball Championship here from May 26th – June 2.

The new stadium, featuring two basketball courts and a capacity of 5,000, is the icing on the cap of several years of improvement in the hoops culture of the city. The foundation stone for this stadium was laid back in 1999, but after lying dormant for nearly a decade, a flurry of activity and interest by the Basketball Federation of India (BFI) encouraged the authorities in the city to accelerate the completion progress – it was fitting then, that, this stadium was inaugurated with a major basketball event, the Youth Nationals, on May 26th, 2011 by Maharashtra’s Chief Minister Prithviraj Chavan. These are the first basketball nationals to ever take place in the city.

And just like the growth of infrastructure and a facility that many would consider amongst the best for basketball in India, the game in the city of Nagpur, which also lay dormant for several decades, has shown considerable growth over the past few years.

Nagpur is also known as the ‘Orange City’ for its world-famous Santreys. In 1967, the city welcomed another orange-coloured, round entity as its own – the basketball! The Nagpur District Basketball Association (NDBA) was founded in 1967. Since then, Nagpur has produced a few legendary players – Manjiri Mandpe remains the only player from the city to have represented India. She is a Chhatrapati Award Winner, the highest Sports Award given in Maharashtra. Other basketball players to receive this award from Nagpur over the years have been Pankaj Deshmukh, Shatrughna Gokhale, Sonal Kawde Deshmukh, Archana Muley, and Satish Warrier, who at seven feet, is remembered as the tallest player to represent the Orange City.

Until recently though, the city didn’t exactly resonate with the word basketball – Nagpur rarely put up great performance in the Maharashtra State Championships and the city’s hoopsters had few options of honing their games. 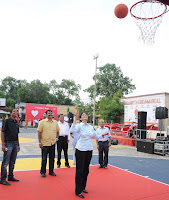 But things have started to change over the past few years. The NDBA’s secretary Anup Rajorkar borrowed an idea of the NBDL, or the Development League of the National Basketball Association in the USA, and he launched a D-League in the city of Nagpur three years ago. Featuring 14 different basketball clubs in Nagpur, each of whom have their own home court, the players take part in competitive league for about a month every years. The league is held for four different age groups and for both the male and female sections.

“The results of the D-League has shown direct improvement in the Nagpur district basketball team,” said Rajurkar, “It has helped in the development of several players and now, both our boys and girls teams have are starting to show good performances in the State Nationals.”

Then, after the success of the D-League, Rajurkar helped to launch his next project in the city– the Chevrolet Motors Nagpur Competitive League (NCL). This is a franchise-based , under-13 league, for boys and girls, with every team having an owner. “Nagpur’s Mini (U13) has also improved since this league,” Rajurkar added. 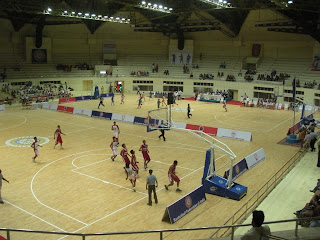 Now, several of the older players from the city are getting a run in their city’s new court – Nikunj Chandak and Rahul Pisipati are representing Maharashtra’s Youth Boys team, while Mathlee Joshi plays for the state’s girls’ side.

With a glitzy new court, a couple of competitive new leagues, and improving young talent, the present of Nagpur basketball is good, and the future could be even better. Rajurkar hopes to bring in more tournaments into the city, and even bring in India’s Senior National teams for a camp into the new court.

In the city that is already the geographical centre of the country, it’s ambition for becoming an important centre for basketball is now closer to becoming a reality.
Posted by KARAN MADHOK at 12:10