A 17-women team of Senior Indian basketball players have been chosen as probables for The 33rd William Jones International Basketball Tournament, which will be held from July 31-August 4 in Chinese Taipei. The women’s tournament will be held at the Taipei Gymnasium in Taipei City.

A selection committee constituted by the Basketball Federation of India (BFI) has chosen a short-list of 17 players after observing their performance at the coaching camp at the KD Jadhav Stadium in New Delhi. The final team consisting of 12 players will be announced one week before the tournament begins. 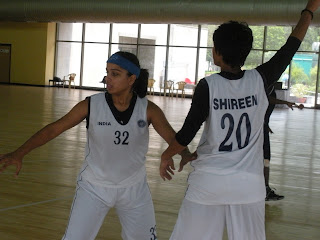 This will be the first international action for the Indian National Basketball Team under new American head coach, Pete Gaudet. The tournament will also serve as preparation for the 24th FIBA Asia Championship for Women, to be held in Omura/Nagasaki, Japan, from 21-28 August.
Posted by KARAN MADHOK at 12:43