The company of giants


India has made basketball history without their most popular basketball player. Now, as Satnam Singh returns to the national team, could he lead the team to further greatness?

This article was first published in my blog for The Times of India on April 21, 2017. Click here for the original piece.

Years before he made history by becoming the first Indian player to be drafted into the NBA, Satnam Singh was asked to punch far above his weight. He was a 15-year-old giant when he was selected to make his debut for India’s men’s national team in 2011 by head coach Kenny Natt. Natt had decided to inject some youth and size into the men’s roster for the Middle Asia Zone qualifiers in New Delhi. Satnam was to become the youngest-player to ever don a Senior India basketball jersey, but a couple of other teenage Punjabi talents – Amjyot Singh Gill and Amritpal Singh – were picked to make their senior debuts, too.

I was present at the Thyagraj Stadium for that qualifying round – Natt, Satnam, Amjyot, and Amritpal’s first senior international outings – when India showed glimpses of their future potential with comfortable wins at home against South Asian opponents. Later that year, this team headed to China for the FIBA Asia Championship and underperformed, but the seeds of the future had been sown. In these three teenagers, India had found the size they were looking for. 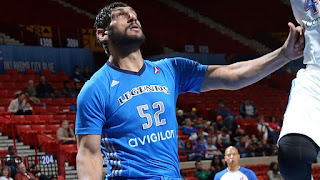 Fast forward nearly six years, and the Indian basketball side finds itself in much better shape. Natt provided the spark, which was lit brighter by his successor Scott Flemming, and it continued to shine even after Flemming’s departure. Over the last few years, led by Amjyot, Amritpal, star shooting-guard Vishesh Bhriguvanshi, and a deep supporting cast, India has twice defeated Asia’s top-ranked team China in international competitions, and most recently, had their best basketball performance in nearly three decades with a 7th place finish at the 2016 FIBA Asia Challenge in Tehran.

Although we have improved on various fronts, the true key to unlock this ‘golden era’ of sorts has been the maturation of our bigs. Amjyot (25 – 6-foot-8) and Amritpal (25 – 6-foot-10) have become one of the most formidable frontcourts in Asia, and their talents have taken them to play professionally in Japan, declare for the NBA’s D-League, and be invited to the NBL Draft Combine in Australia. Right behind them, players like Palpreet Singh Brar and Rikin Pethani have given us depth in that frontcourt, too: Palpreet (23 – 6-foot-9), in particular, has improved rapidly and became the first Indian to be drafted in the NBA D-League last year (although he never earned a roster spot). Veteran forward Yadwinder Singh (30 – 6-foot-6) is still an important part of the national team and impressed at the NBA Combine recently in Australia, too.

The only one missing from the equation has been Satnam (21 – 7-foot-2), the young man who became the poster boy of Indian basketball when he was drafted to the NBA by the Dallas Mavericks in 2015. Satnam, who was recruited to play at the IMG Academy in the United States as a 14-year-old in 2010, hasn’t played for India since 2013. Instead, he has spent the last few years improving his skills in the USA and playing for the NBA D-League team Texas Legends.

His absence has allowed Amjyot, Amritpal, and Palpreet to blossom into stars and India has, ironically, made basketball history without their most popular basketball player.

In a few months, it is all set to change. The 2017 FIBA Asia Cup – Asia’s most-prestigious basketball championship which will feature top teams from Oceania for the first time – is set to take place in Lebanon in August. With Amjyot, Amritpal, and Bhriguvanshi already in top form, India were looking poised to make some major noise and significantly improve their low FIBA World Ranking (currently 53rd). But earlier this week, the BFI announced that Satnam will be returning to the national team after a four-year hiatus. If all the available players are healthy, India will have its best-possible pool of talent to choose from for Lebanon.

The reunion of Satnam with Amjyot, Amritpal, and Yadwinder, alongside the younger wave of big men in contention like Palpreet, Pethani, Arvind Arumugam, Aravind Annadurai, and Ravi Bhardwaj have given India a sudden embarrassment of riches in the power forward and center positions. Counting the backcourt, only twelve can make the final roster for the FIBA Asia Cup; whoever will be appointed the team’s head coach (the last man in charge was Bhaskar Sappaniambalam for the Super Kung Sheung Cup in Hong Kong) will have the headache of sifting through these company of giants to pick six for Lebanon.

Furthermore, the coach will have to decide if he will continue to start with the successful duo of Amjyot and Amritpal and relegate Satnam – he of worldwide hype and NBA D-League experience – to the bench.

My pick for the starting five will be to stick with Amjyot and Amritpal; between the two of them, they have given India incredible frontcourt versatility over the last three years and formed a close bond from playing together in Japan. Amritpal, an elite post defender, plays closer to the basket on both ends of the floor. Amjyot has developed into a threat from both the perimeter and the post and helps space the floor for Amritpal in the middle. Satnam is a solid rim protector, can finish from inside and out and is stronger than both Amjyot and Amritpal. But he is slower on his feet and inexperienced with the national team.

At the FIBA Asia Challenge last year, India defeated Philippines and China to enter the Quarter-Final stage, where they were stopped by eventual winners, Iran. Iran featured Hamed Haddadi, the 7-foot-2 behemoth dominant center, who tormented India with 17 points and 23 rebounds in this crucial game. It will be in situations like these, going against elite strong players in the post, where Satnam’s presence will be most valuable, and India’s depth at the big man position will give us a fighting chance.

The bigger problem for India, however, is going to be in the backcourt. While Bhriguvanshi has proven to be one of the finer Asian players in his position, India have no other players who can consistently challenge to match the talent and athleticism of other international guards. Expectations will be high for TJ Sahi, Akilan Pari, and rising youngster Baladhaneshwar Poiyamozhi, but without better perimeter options, the Indian lineup will remain flawed.

Despite this unbalance, one of the secrets to India’s recent success has been the team’s chemistry and comfort-level with each other. My hope is that Satnam can intermingle his game smoothly with our other top players without disturbing this chemistry. The best-case scenario for India will be if he can master the delicate equilibrium between being at his individual best while playing within the team system.

All of Asia and Oceania’s top qualifying teams – China, Philippines, Iran, Japan, Lebanon, Australia, and New Zealand – will be sending their best-possible rosters for the prestigious tournament this year. With Satnam, Amjyot, Amritpal, Vishesh, and Palpreet on the roster, India may have, on paper, our greatest team ever. Could they lead the national team to further greatness?