Kenneth Faried is in India, watching the Playoffs and chilling at the Taj

In case you missed it, the "Manimal" himself, Kenneth Faried of the Denver Nuggets, landed in India earlier this week in behalf of the NBA to promote the ongoing NBA Playoffs. He will be travelling to Mumbai, Delhi, and Agra during his trip. 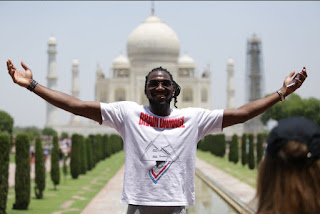 Faried's first stop was already at the Taj Mahal in Agra soon after he landed up in India on Wednesday. On Saturday, May 20, he will stop over in New Delhi where he will engage with fans at the Ambience Mall in Gurgaon as part of NBA Zone powered by Jabong, the largest basketball entertainment festival in India. On May 21, Faried will travel to Mumbai for a live television appearance on Sony SIX’s NBA morning show “Around the Hoop” to share his perspective on the NBA Playoffs.

“I’m excited to visit India for the first time and celebrate the Playoffs with fans,” said Faried. “The NBA is doing a lot to develop young players there, and I’m looking forward to seeing the passion they have for the game firsthand.”

“Hosting NBA players in India is an important part of our continued efforts to grow basketball across the country,” said NBA India Managing Director Yannick Colaco. “The opportunity to meet and interact with a player of Kenneth’s caliber will inspire young boys and girls to learn the game and the values it teaches, including teamwork, integrity and respect.” Faried, a 6’8” forward from Newark, New Jersey, was selected 22nd overall by the Denver Nuggets in the 2011 NBA Draft. Faried was named to the NBA All-Rookie First Team in 2012 and selected as the Rising Stars Challenge MVP at NBA All-Star 2013 in Houston. Faried averaged 9.6 points and 7.6 rebounds per game over the past season for the Nuggets, who finished 9th in the West.

NBA Zone powered by Jabong is a basketball lifestyle event that brings the NBA experience to fans in India through digital and social media engagement, oncourt competitions, an innovative cinematic experience, gaming, music, merchandise giveaways and more. The event is free and open to the public and will be conducted over 26 weekends in malls across Bangalore, Mumbai and New Delhi, reaching more than half a million fans.
Posted by KARAN MADHOK at 10:30