FIBA, the international basketball federation, made an important change to their competition system last year. Under their new calendar, qualification for the FIBA Basketball World Cup - scheduled to be held in China in 2019 - will follow a long journey of qualifying rounds. This is great news for Indian basketball fans: India will get the experience of playing in many more international basketball games in the qualifying process, and get the chance to host major FIBA matches on our home soil. 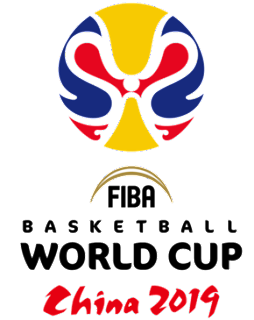 32 teams from around the world will play in the FIBA World Cup in 2019, out of which seven will be from the Asia/Oceania. Based on our past performances at the FIBA Asia stage, India are among the 16 Asian/Oceanic teams to have a chance to qualify for those seven spots.

Before the draw for the qualifiers, India were placed in 'Pot 6'. The draw for all of the FIBA World Cup qualifying groups around the world - Americas, Europe, Africa, and Asia/Oceania - was held in a major ceremony in Guangzhou, China, on Sunday. India were drawn into Group C, along with Syria, Lebanon, and Jordan. And yes, that was former NBA legend Scottie Pippen holding up a piece of paper as he announced 'India'!

2019 FIBA World Cup Asian Qualifiers Draw for the First Round: 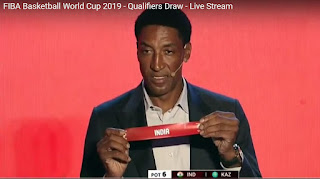 Teams in each group will play each other home and away between November 2017 to July 2018 in the First Round. Here is the schedule for qualifying games for India (home team first): Mark these dates on your calendars; it's still not clear where exactly these games will be played, but I'm already hoping for a big home crowd for our national men's squad wherever they play! 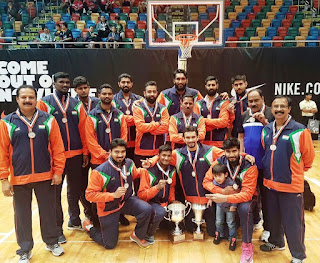 To qualify for the Second Round, India have to finish within the top three of their group. As they currently stand in the FIBA rankings, India are the third-best team in Group C, behind Jordan and Lebanon. And based on our recent trends of improvement, India is definitely better than what the current FIBA ranking (53) indicate. As long as the team can put up a strong performance up to their expectations, they will make it to the next round.

12 of the above 16 Asian/Oceania teams will be in the Second Round of the qualifiers, where they will carry over the results from the First Round (which is why it's important for India to not just finish in top three but amass as many points as possible), and then be divided into two groups of six. Between September 2018 to February 2019, teams in each group will once again play in home and away games among each other. The top three teams from each group, along with the best-placed fourth team, will qualify for the World Cup!

But before all that, India have to set their sights at the upcoming FIBA Asia Cup, set to be held in Lebanon from August 10-20, 2017.
Posted by KARAN MADHOK at 21:59