Seven years ago, the IMG Academy in Florida selected eight Indian teenagers on scholarship to be trained in basketball and educated in the United States. The youngsters developed in different ways and some found more success than others. The biggest name in the group turned out to be Satnam Singh, a seven-footer from Punjab, who in 2015 bypassed college to become the first Indian player to be drafted to the NBA. But while Satnam hogged the limelight, another star from the original group of eight has blossomed from the shadows.

Talented guard Kavita Akula - from Bhilai, Chhattisgarh - has made history by becoming the first Indian-born female basketball player to receive a full scholarship from a Division 1 college in the United States, the Grand Canyon University in Phoenix, Arizona. After making a name for herself in two years of junior college at the Garden City Community College (GCCC) in Kansas, this is a major step forward for the 21-year-old.

Akula signed a letter of intent with Grand Canyon on Monday and will be joining them in September this year. ESPN reported that Akula will major in business management and marketing. 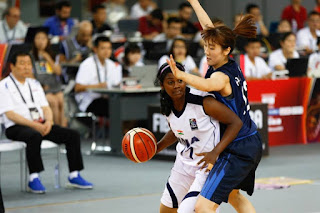 Akula had two offers on her plate -- one from Grand Canyon in Phoenix, Arizona and another from Saint Francis University in Pennsylvania -- but she decided to sign with Grand Canyon because of their new head coach, Nicole Powell, who is a former WNBA All-Star.
"Coach Powell has great energy and she is looking for somebody who can lead the team, and I thought I will fit in well," Akula said. "Coach said my experience playing junior college will help the team."

Before she begins her new journey, however, Akula's attentions will be diverted back home. Over the next few months, she will be practicing with India's national women's team as the prepare for the prestigious FIBA Asia Women's Cup, set to be held on home soil in Bengaluru in July. Akula was last part of Team India at the 2015 FIBA Asia Championship where she couldn't break into the rotation. With her game seeing rapid improvements over the last couple of years, she will be expected to play a much bigger role this time around.

At GCCC, Akula led the team in three-pointers in both her freshman and sophomore campaigns, falling five treys short of the school’s career record, set by Marci Johnson from 1999 to 2001. She was a rising star in Chhattisgarh before being picked for the IMG Academy and has played for India at the junior levels in the past. You can read more of her fascinating basketball journey in this older article by Aishwarya Kumar for ESPN.