Upcoming Bollywood film 'Half Girlfriend' will feature a lot of basketball


If you've paid attention to any of my work the last couple of weeks, you would've noticed that I called attention to the 1998 Bollywood classic Kuch Kuch Hota Hai and its influence and legacy on Indian Basketball. The super-hit film will be remembered for the awkward and flirtatious basketball romance scenes between Shah Rukh Khan and Kajol. KKHH, followed by Koi Mil Gaya and Dhoom 2 have been the only mainstream Bollywood films to feature basketball in a major way. And considering their box office returns, all three discovered that basketball in Indian cinema apparently equals to big bucks. 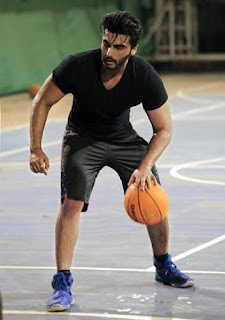 It seems now, perhaps, that another Hindi film is finally willing to take a chance on hoops again.

Based on a book by India's highest-selling English novelist Chetan Bhagat, the film Half Girlfriend - scheduled to be released in April 2017 - is currently being shot in New Delhi. Production information has revealed that Half Girlfriend's star pair Arjun Kapoor and Shraddha Kapoor have both been honing their hoop skills as basketball will be a used as a major plot device in the movie.

I haven't read Half Girlfriend, because Chetan Bhagat writes as well as James Harden plays defense, but a quick Wikipedia search of the book's plot reveals that much of the story is about a protagonist who makes it to St. Stephen's College in Delhi on the sports quota as a basketball star. Eventually, the common love of the game leads him to an on-again/off-again relationship with his love interest (his half girlfriend).

Arjun Kapoor, who plays Madhav Jha in the film, has spent the last month training on the court to make his basketball scenes more realistic (Shah Rukh, Hrithik, Kajol, and co. have so far shown how wrong basketball scenes can go in India if the actors have no clue how to play the game) and it seems to have paid some dividends. A few days ago, he tweeted a short video of his practice scenes in Delhi and announced that more 'Basketball Diaries' from the film's shooting will be coming soon. International stunt and sports director Robert Miller has been working to train both Arjun and Shraddha Kapoor to make the basketball scenes look realistic for the film. Much of the filming of the basketball scenes in Delhi have been taking place at the SRCC college court.

It's admirable to hear that the film's director Mohit Suri and the star actors are putting in a genuine effort to make the basketball scenes in Half Girlfriend more memorable. However the rest of the film turns out to be, I hope the hoop scenes can inspire another generation of ballers like KKHH inspired players 18 years ago. And if basketball's charmed effect on the Indian box office is any indication, Half Girlfriend may already have sealed its success story.