In case you haven't heard, FIBA - the world's governing body of basketball - will introduce what it calls the 'New Competition System' from next year. From 2017 onwards, the method of qualification for major FIBA worldwide events and the Olympics will change, as will the FIBA calendar and some of the continental tournaments (such as Oceania joining Asia). These are significant changes which will prove useful to provide countries such as India a longer qualification process for the FIBA World Cup and more visibility back home as India will get the opportunity to host several qualifying games. 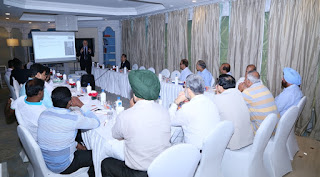 To help familiarise the Basketball Federation of India (BFI) with the new system, officials of FIBA Asia's head office hosted a workshop in New Delhi on Monday, June 28. Several leaders of the BFI's executive committee attended this workshop. The workshop introduced the various elements of the New Competition System and also brought the top BFI administration up to date on the tasks ahead for the National Federation.


"India's potential for growth in basketball is obviously enormous. India has always been on FIBA's radar for pushing the agenda of basketball development. This workshop is another step in that direction," said Mr. Hagop Khajirian, FIBA Regional Director-Asia.
"The New Competition System provides a great platform for Indian basketball and basketball in India to go the next and higher level in all areas. It's true that the results coming out of Indian basketball have not always matched the potential. But we in FIBA truly believe that time has come for India to make use of the opportunity," he added.

The workshop was also attended by representatives of the Indian Olympic Association and the Ministry of Sport in the Government of India.

"We have certainly not performed up to the expected levels. This workshop is an eye-opener in that sense," said Mr. K Govindaraj, BFI President.
"It's also a wakeup call for us in the BFI to shrug off the cobwebs and start delivering to the Indian basketball fan what he truly deserves," added Mr. Chander Mukhi Sharma, BFI Secretary General.


Here is a snappy video explaining the New Competition System for Asia.

It's heartening to hear BFI members admit that India is not performing to the expected levels and is tangled in bureaucratic cobwebs. Admitting is the first step. Now, they have to get up and do something about it. India cannot afford to waste its basketball potential year after year. The new FIBA competition system could bring a lot more attention to basketball in India. Fans need a competitive product, with players who are well coached, in good shape, and who will defend the national flag with pride. The BFI will need to ensure that India has the infrastructure to handle the upcoming schedule of international FIBA matches.

FIBA believes in India, as the country's potential could make it a big and lucrative market for basketball in the future. Now, India needs to honour that belief and deliver from its own end.