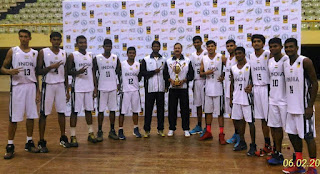 At the 2016 South Asian (SABA) U18 Basketball Championship for Men in Dhaka (Bangladesh) on June 1-2, India's junior team simply came, saw, and conquered. India defeated South Asian opponents Bangladesh, Sri Lanka, and Nepal over two days by an average point differential of 68.3 points per game, won the SABA U18 Basketball title once again, and qualified for the FIBA Asia U18 Championship scheduled next month against the best teams in the continent.

India's squad for the tournament was picked based on performances at last month's Junior National Basketball Championship in Puducherry. The final 12-man roster in Dhaka is being led by experienced head coach Jai Prakash Singh and rising young star Baladhaneshwar Poiyamozhi from Tamil Nadu.

In the first game against Bangladesh on Wednesday morning, India scored 57 points in the first half and cruised the rest of the way en route to a 80-31 win against the hosts. With such a strong first win, India set the wheels in motion to carry their momentum for the next two games. With multiple players contributing, Vishal Kumar Gupta scored 15 points to lead India's scoring attack.

The second game against Sri Lanka was later on Wednesday afternoon, and India again won by a comfortable margin, 127-52. Here too, most of India’s damage was done in the first half, with 73 points against 21 by Sri Lanka. India put the game out of reach with a 28-9 run in the third quarter. Gineeb Benny (21) and Baladhaneshwar (18) were the top scorers for India.

India's final match of the round-robin tournament was on Thursday morning versus Nepal. India left no room for doubt that they are the force to contend with in the South Asian region with a 117-40 win and retained their SABA U18 title.

India have now qualified for the 24th FIBA Asia Championship, which will be held at Tehran (Iran) from July 15-24, 2016.