The first Indian-born player to be drafted into the NBA, Mavericks rookie Satnam Singh returned home this summer as a hero.

This feature was originally published for SLAM Online on August 26, 2015. You can find the original version here. 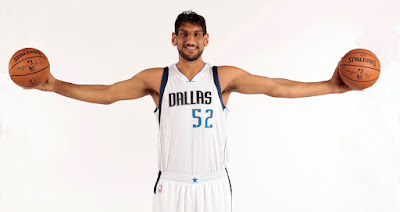 For five years, Satnam Singh lived his life between two environmental and cultural extremities of home and school. Home, for Satnam, was the tiny village of Ballo Ke in Punjab’s farming hinterlands, a nondescript Indian village of less than a thousand people, where his family lived and farmed. School was the state-of-the-art facilities of the IMG Basketball Academy in Bradenton, Florida—thousands of miles away, in the United States.

In aesthetic, development, comfort, culture, and language, Ballo Ke and Bradenton couldn’t be further apart. And yet, somehow, India’s biggest basketball hope—a 7-2 giant with the expectations of turning the world’s second-largest population into the sport’s next lucrative market—handled the extremes with surprising aplomb. He was recruited by IMG at 14, whisked away from Punjab to Florida, honed and perfected his game in a completely new environment, and returned home regularly to pay homage to the land that birthed him.

Each trip back from the US, Satnam traveled through India’s capital, stopping by in New Delhi for a short stay before taking a challenging trip back to his village. Despite his rising status among India’s small (and mostly ignored) basketball fraternity, he was mostly anonymous in India off the court. Or, as anonymous as a 7-footer could possibly be in a land where he stands a foot-and-some taller than the average male.

But a couple of weeks ago, in his most recent trip home, everything was different for the now 19-year-old. Satnam was greeted by dozens with banners, marigold garlands, flashing cameras, friendly handshakes, and celebration to rival the scenes of a Punjabi wedding. For the next two weeks, he was welcomed by an entourage of fans and well-wishers everywhere he went. He dominated the sports pages of India’s mainstream newspapers—the same papers which have largely ignored basketball for decades—every day. He filmed news-channel documentaries, made coaching and speaking appearances, and was shadowed closely by cameras even when he prayed. No Indian citizen whose primary profession as to dribble a basketball had ever experienced celebrity like this before.

Satnam had broken a barrier that none of his countrymen—in India’s long basketball history—had ever penetrated. He’d become the first Indian citizen to be drafted into the NBA.

The NBA Draft is the culmination of years of toil and dreams, and the birth of a whole new era, for dozens of young and talented basketball players. For the average basketball fan, though, most players picked outside the lottery or the later stages of the first round are just names to fill out blank spaces. Only a small percentage of those names ever make an NBA appearance, and an even smaller percentage leave enough of a mark to be truly remembered.

As usual, the big names in the top 10, and the “steals” and role players were picked up later in the first round. Hours after the Minnesota Timberwolves made Karl-Anthony Towns the number-one pick of the night, the Dallas Mavericks selected Satnam Singh with the No. 52 pick of the 2015 Draft, sandwiched between Tyler Harvey of the Magic at 51 and Sir’Dominic Pointer to the Cavaliers at 53. After a soft cheer from what was left of the crowd gathered at the Barclays Center in Brooklyn, the 2015 Draft concluded without further notable interruption. In reality, most fans had checked out by the time the first round concluded.

But No. 52 (like the jersey number he donned during Summer League) was more than just a name to fill up a blank space. Just like they had done with Wang Zhi Zhi and China 16 years earlier, the Mavericks made history for a billion-strong population with their second round pick.

Hugs. A draft hat. A handshake with the deputy commissioner. A life transformed.

Despite the pick, few around the league and in the Mavericks camp were truly expecting the big kid to be NBA-ready anytime in the near future. Mavericks owner Mark Cuban made it clear early that Satnam would be heading to the Mavs’ D-League affiliate Texas Legends (now coached by former NBA guard Nick Van Exel) and would be, in NBA terms, a “project.”

As the only draft pick without college, overseas professional, or prior D-League appearances, Satnam showed his inexperience in the Summer League, stumbling, stuttering, and taking some baby steps forward for the Mavericks. But he did just enough to leave his coaches and his owner impressed.

“The Summer League was pretty good because I had never before played that level,” Satnam told SLAM over the phone soon after Summer League ended. “It was my first time there, and it was a good experience. I learned about the speed of the game, how much faster it is, and about my own speed and movement in the time I got to play. I think my coaches were happy with my progress, especially since I was coming straight from school to there, without college. IMG Academy is [high] school level and this was much different. This felt more professional, like being at a job.”

Back home, however, even those baby steps were being celebrated as giant leaps.

In early August, Satnam returned to India for the first time after being drafted. His fortnight back in the homeland was jam-packed with events and media appearances. Satnam toured the Golden Temple in Amritsar with his family and former coaches, taking a moment to pray at the Sikh holy shrine. He spent time in his village, briefly turning the quiet little hamlet abuzz with national media interest and attention. He returned to the Guru Nanak Stadium in Ludhiana, the court where he first honed his game as a pre-adolescent. He reconnected with his boyhood idol in Indian basketball (Jagdeep Singh Bains) and paid respect to the family of the late Dr. Subramanian, one of India’s most respected basketball coaches who taught the game to Satnam and dozens of other national team players. Satnam trained young players in Ludhiana, travelled to the state of Rajasthan to interact with students in Jaipur, and received felicitations and accolades everywhere he went. 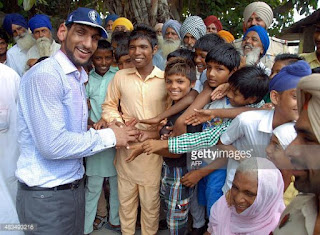 Like a good Punjabi is supposed to, he danced the bhangra with friends and fans. And he did it all wearing a Mavericks hat.

“People in India can learn from my example if I do better for myself and go further in my career,” Satnam said. “I want to show young players that I got this far by focusing on nothing but the game. I’ve been drafted in the NBA and I want to play in the NBA. I hope that more Indian players can follow me here. But if you want to become like me, follow the hard work I did. Hard work, every day. Even if there is a move you’re good at, keep trying it multiple times. Make it perfect. Keep working on your game. Don’t focus on anyone or anything else.”

Soon before his triumphant return to India, Satnam reflected at how much life had changed for him between the ages of 14 and 19, when he went from being a scholarship student at IMG to India’s first NBA draftee.

“Back then, I had only thought that I will play hard and see where it goes,” he said. “Now, I’m feeling good to have come this far. It’s good, but it’s not great—because I won’t rest until I play my first NBA game. I won’t be happy until my first game. When I see a full stadium of fans, and feel the support of Indian fans, that is when I’ll feel truly happy.”

In 2011, months before his 16th birthday, Satnam already made his senior team debut for India and played bit minutes in the FIBA Asia Championship that year in China. For the next two years, while most of his classmates in school enjoyed family and downtime during the holiday seasons, Satnam returned to India to play for the national team and in domestic championships.

Now, while he tries to chase his NBA dream, Satnam has made it clear that he won’t be donning India’s national basketball team colors anytime soon, specifically at the 2015 FIBA Asia Championship set to tip off back in China the last week of September.

“This year, I will not play for India at the FIBA Asia Championship,” he told SLAM. “When the FIBA tournament happens, I will have to be back here, in the US, for practice and for training camps. Hopefully, I will get a chance to play for India when there is no clash in the schedule between the international tournaments and my engagements in the US. I have no plans to go to play for India until I’m established professionally.” 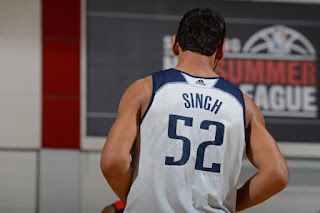 For now, his focus is completely on using the D-League stage to take the next leap higher, where he hopes to follow in the footsteps of 7-5 Canadian giant Sim Bhullar. Last season, Bhullar slowly gained his footing for the Reno Bighorns of the NBDL to eventually get a call-up by the Sacramento Kings and become the first player of Indian-origin to play an NBA game.

“What I’ve been told by my coaches is simple,” Satnam said. “The better I get, the more opportunities I will get to play. They have said that I could win a 10-day contract by the Mavericks if I play well enough in the D-League, and then 10 more days if I get better and so on and so on. I was informed by the other coaches there about the D-League and my future after the D-League. The better I play there, the higher up I’ll go.

“I can definitely be ready to make the jump the NBA soon,” he added. “I know I can do better, at least improve my game by 50 percent when I’m in the D-League. Many of the players in the D-League are en route to the NBA or have already played there—playing and practicing among them will improve me a lot. This is a big chance for me. I will feel good when I go up against other seven-footers in the D-League.”

However his journey proceeds, Satnam has already achieved the impossible. The boy from a non-descript Punjabi village has come further than the distance between Ballo Ke and Dallas and jumped higher than his own gargantuan height. On Draft night, he may have been a relatively unknown giant in a sharp suit; but once he was drafted, his name rung out across fans in India, and eventually, fans around the world, too.

“My hope is to play basketball for long, and play in the NBA a long time,” he said, “I want to help improve things in India, too. When I’m done with playing basketball, I want to go back to India and find other players and help them, too. I want to go help and teach everyone in India.”