When rainfall hit the courts at Bhavnagar (Gujarat) on Monday afternoon, all the outdoor basketball action came to a halt. It took a couple of hours before the dark clouds cleared the skies and the Youth Nationals - India's best domestic exhibition of U16 basketball talent - continued.

But the metaphorical dark clouds have remained hovering over all basketball activities in India all year. It is to the credit of this resilient, disputed faction of the Basketball Federation of India (BFI) that the show has continued to go on, and Indian basketball - domestic and international - hasn't yet come to a complete halt despite the speed-bumps on the way. 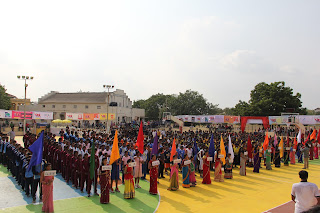 On Monday, September 14th, the 32nd Youth National Basketball Championship for Boys and Girls tipped off at the outdoor courts of Bhavnagar University. The week-long tournament is set to feature 22 boys' teams and 21 girls' teams in a showcase of the finest next-generation basketball players in India. The championship is being organized by the Gujarat State Basketball Association under the aegis of one of the two disputing factions of the BFI. The BFI split into two opposing committees earlier this year, with each questioning the legality of the other in an ongoing off-court battle. But Team Govindraj - the BFI faction behind the organization of the 32nd Youth Nationals - have held firm of their stand atop the federation and continued to hold events in India and abroad as normal.

On-court, the action promises to be much more palatable for fans of the game itself. Tamil Nadu have entered the tournament as reigning champions in both boys and girls divisions from last year's Youth Nationals in Chandigarh. Kerala - the runners-up in both divisions - will look to finish one better this time, while the squads from Karnataka and Maharashtra (Girls) and Haryana and Chhattisgarh (Boys) will have their eyes on the prize, too. The finals of the tournament will be held on September 20.

The first morning of the tournament saw Tamil Nadu Girls cruise to an easy victory over southern neighbours Andhra Pradesh 49-12. In the other Level 1 game in the girls’ category, Haryana pulled off an unlikely 61-49 victory against last year’s runners up Kerala, on the back of Meena’s 22 points. In the boys' division, Karnataka notched a win over Jammu and Kashmir Chandigarh scraped past West Bengal. 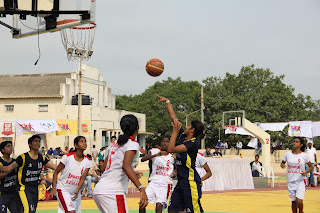 Girls
At the tournament's opening ceremony on Monday, all the invited teams participated in a march-past led by a trained marching band. Chief Guest for the ceremony was Nanubhai Vanani, the Sports Minister of Gujarat. Other dignitaries present included Mansukhbhai Mandaviya (M.P., Rajya Sabha) and Jitubhai Vaghani (M.L.A., Bhavnagar West). From the BFI, Secretary General Chander Mukhi Sharma was present and addressed the crowd. He requested all coaches to ensure maximum output from their team players as the selection committee was watching all games and all teams. Dr. Shailesh Zala, Vice Chancellor, Bhavnagar University, declared the event open. Karp Impex Group, involved in the business of diamond polishing, crafting and sale and based out of Surat, Gujarat, is the main sponsor for the event.

And yes, although rainfall interrupted the day's basketball events a little bit, the skies cleared and games eventually went on as scheduled. Hopefully, the skies over the BFI infighting can clear soon, too, and Indian basketball can continue uninterrupted in the future.