Over the past 35 years, Carlos Barroca carved up a legendary career as a leader in the game of basketball back in his home nation of Portugal. Now, he gets the opportunity to bring in that experience and leadership qualities to carve up a new legend in India.

The NBA recently announced that Barroca will be taking over as the Senior Director of Basketball Operations for NBA India. A former basketball coach, general manager, television analyst, and ambassador, Barroca will replace Troy Justice, the much-beloved American coach and basketball ambassador who had enjoyed several successful years closely aiding the growth of hoops in India. 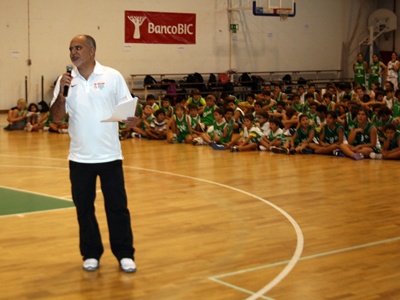 Barroca will spearhead the NBA's basketball development initiatives in India, which include training local coaches and players, executing grassroots programmes and working with key basketball stakeholders across India to grow the sport. His 35 years of experience has given him several different roles involved with basketball, mostly in Portugal. During the 2000-2001 season, Barroca served as the head coach of the Portuguese Basketball Federation and the national U-20 squad, and has joined the NBA’s Basketball without Borders programme as a guest coach since 2006. Following his time on the sidelines, Barroca was appointed as National Director of High School Sports Programme and selected as a member of the Supreme Council for Sports as well as the Olympic Committee of Portugal. Barroca also served as a consultant for Adecco, a Swiss HR company, S.A., where he promoted team building and motivation in corporate HR.

Barroca joins the NBA India team at a crucial time: in India, the league is currently involved in various grassroots initiatives to grow the NBA brand as well as the brand of basketball, such as the Reliance Foundation Jr. NBA programme, NBA Jam, and more. The rise of the NBA in India will not be isolated from India's overall improving basketball fortunes, and Barroca will have to keep an eye on the Basketball Federation of India (BFI), the performances of the India's national squads, and the promise of a potential professional basketball league in the future. Meanwhile, India and the NBA have been drawing closer together abroad, too: an NBA team now has an Indian owner (Vivek Ranadive of the Sacramento Kings) who will be visiting India along with the NBA's new commissioner Adam Silver this December. Plus, the same team also made Canadian national Sim Bhullar into the first-ever player of Indian descent to be signed by the NBA. With so much on their plate, it is an exciting new beginning both for Barroca and for NBA India. But every new beginning signifies an end too; and in this case, it marks the end of a fruitful tenure by Troy Justice as NBA India's basketball operations' senior directory. Justice will join the NBA's Basketball Operations department in New York at the end of September, working closely with each member of the Basketball Operations staff in the regional offices to support their efforts to grow the game of basketball at both the elite and grassroots level. He will also focus on expanding the NBA’s global youth basketball programming through the Jr. NBA/WNBA programme.

In India, Justice will leave behind some big shoes for Barroca to fill. India can be a challenging place for many outsiders, but Justice took to the country's many idiosyncrasies with ease, and soon, became as popular draw across the country's grassroots basketball circles. From Kerala to Mumbai to Punjab and more, Justice traveled the length and breath of India over the past half a dozen years preaching the gospel of hoops. His personal approach to coaching, his acceptance of everything Indian, and of course, his deep knowledge of the game, all made him a fan favourite among both players and coaches in the country.

A personal thank you from my end to Justice for being just the right fit for basketball and for the NBA in India. He got his start in Indian basketball around the same time I did, and I will always remember our initial correspondences and meetings as we worked to help the game rise from the ground up. Of course, I will always remember our little trip to Aman's in Ludhiana for the best butter chicken in Ludhiana, but that's another story for another day.

Good luck to Justice for his endeavours ahead, and a warm welcome to Barroca, who will hopefully continue to expand on the path of his predecessor.
Posted by KARAN MADHOK at 09:12