India's largest-ever 3x3 basketball tournament, the 2013 NBA Jam, came to an end in Mumbai after traversing and collecting basketball talent from across the country on Sunday, September 29th, with the National Finals. The one-month long extravaganza of hoops and music was held in its city stages in four Indian cities before the Finals in Mumbai. NBA India, which organized the event, also welcomed former NBA players (and champions) Horace Grant, Ron Harper, and Peja Stojakovic to Mumbai to attend and participate in the festivities. 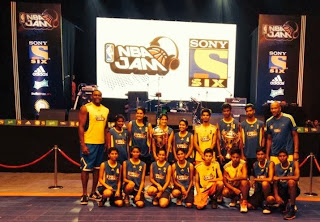 The NBA JAM National Finals were held at the Mehboob Studios in Mumbai, and the teams from Bangalore shone brightest under the flashing lights, winning three of the four national titles in the Men's, Women's, and Boys' divisions. A squad from Pune won the trophy in the Girls' division.

Starting in Hyderabad on September 5th, NBA Jam was held over every weekend of the month in a different city, and the champions of each region were then selected for the National Finals. The travelling basketball circus made stopovers at Bangalore and New Delhi before arriving to Mumbai for the final leg of the city competition, and then remaining in the same city for the National Finals. Over 500 teams and 1900 players took part in the action throughout the different stops in India in the four divisions: 16-18 years boys' and girls' and 19-23 years men and women.

Results of the National Finals - via SportsKeeda 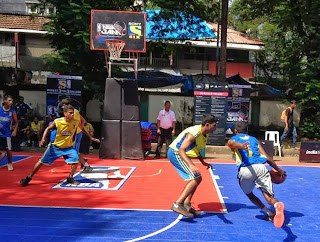 Sony SIX, who are in broadcast partnership with NBA India, are televising the Finals in India.

Winners of the four cities had an opportunity to team up with Grant, Harper, and Stojakovic to play in the NBA Legends Game. Besides the three former players, the NBA also sent a mix of entertainers from the league, which included the Sacramento Kings cheerleaders, the New York Knicks Acrobatic Tumblers, and the Miami Heat mascot Burnie. 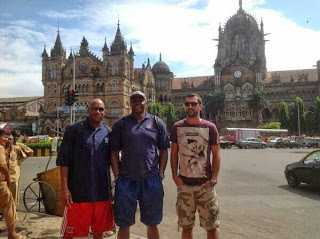 Several Indian celebrities also attended the Finals, including Nikhil Chinappa, VJ Bani, Raanvijay, Sushma Reddy, Carol Gracias, and Neetu Chandra. Throughout the course of the NBA Jam events around India, some of the biggest Indian bands and DJs performed and entertained the crowds.

Earlier, the three NBA legends were given a chance to tour the city of Mumbai and interact with NBA Jam participants through drills, shooting competitions, signing autographs, and more. Horace Grant was also present for NBA Jam's Delhi edition a week earlier, where he conducted drills and felicitated Delhi Boys' squads which won the Junior and Youth National Basketball Championships this year.
Posted by KARAN MADHOK at 11:48