Vivek Ranadive and Adam Silver to visit India this December


Vivek Ranadive is a Mumbai boy. He was born and bred in India's largest city before he headed West to study at some of the world's finest educational institutions, launch a billion-dollar software company, write a few books, and eventually, become the first-ever Indian-born owner of an NBA franchise when he secured the majority shares of the Sacramento Kings. 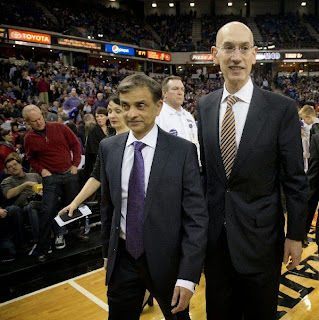 From holding Indian culture nights in Sacramento to signing the NBA's first player of Indian-descent, Ranadive has taken the lead in bringing the NBA closer to the Indian community. But ever since becoming the Kings' owner about 15 months ago, he hadn't yet taken a trip back to the country of his birth in an official capacity.

As the Grand Marshal of the India Day Parade in New York City yesterday, Ranadive announced that he will make that official visit to India this December. And he won't be alone - Ranadive also mentioned that he will be bringing along the NBA's new commissioner Adam Silver, too for the league's head honcho's first-ever trip to India.

The last time an active NBA commissioner visited India was when David Stern headed to Mumbai in summer 2013 to launch an NBA Cares programme. Relative to Stern's other global itineraries over his 30 years as the commish, it was surprising that saved India for so late in his tenure. 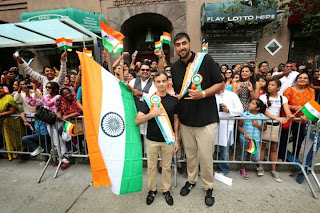 Silver, on the other hand, took over the NBA at an opportune time for the league's relations with India. Ranadive, who was previously a minority owner of the Golden State Warriors, broke into the scene in Sacramento and has since aggressively promoted 'Indianness' in the NBA. And the NBA's presence through TV broadcasts, social media, grassroots events, and in-person visits continued have also been steady rise in India. It makes perfect sense that Silver's first introduction to India be led by the man who can smoothly bridge the gap between the traffic jams of Mumbai and hard-maple court surfaces in Sacramento: Ranadive.

When he made this announcement, Ranadive was leading the India Day Parade in New York along with Sim Bhullar, the 7-foot-5 Indo-Canadian who was made the first player of Indian-descent to be signed into the NBA by the Kings just days ago. It is unclear whether Bhullar will still be a part of the Kings come December - he could be cut if he doesn't perform well at training camp in a couple of months or demoted to the Kings' D-League affiliate Reno Bighorns. Either way, it is unlikely that Bhullar himself will have time in his playing schedule to join Silver and Ranadive in India in December - and for fans rooting for him to have a bigger role in the NBA, the busier he is, the better.

Although neither of them are 7-foot-5 behemoths, Ranadive and Silver are metaphorically 'big' enough to draw considerable interest from the Indian mainstream media when they do visit. For Ranadive, this trip will mark his first official opportunity to speak out to Indians directly and up-close about the Kings and the NBA. For Silver, we hope that the visit is the first of many of the NBA's growing interest in India.