While at the senior level, Iran had replaced China as Asia's most dominant side in recent years, the Chinese showed another glimpse of why their future stars might be ready to reclaim their nation's hoops honour. For the third consecutive time, China won the FIBA Asia U18 Championship, hoisting the title in the tournament's 23rd iteration in Doha (Qatar) after a convincing victory over Iran in the final. China played fantastic basketball through the course of the 10-day tournament and made this their 11th victory overall in Asia's most prestigious junior basketball tournament. 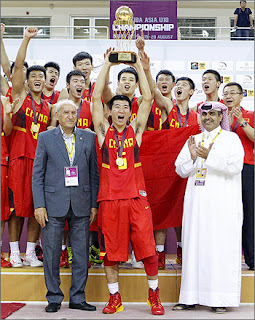 China, who suffered a close call in winning the gold in Ulaanbaatar in an overtime game against Korea two years ago, had no such troubles this time around. They dominated the final early, breaking out to a 16-0 scoring run in the first quarter and holding on to a huge 36-19 lead by halftime. China kept their command on the game in the second half and had turned the game into a blowout before the beginning of the final quarter. China's most-accomplished young player Zhou Qi only made an appearance in the second quarter, by when his team had already grasped on to complete control of the game. Zhou still ended up with a game-high 16 points to lead his side to victory.

2012's silver-medalists Korea had to settle for Bronze as they bounced from an early deficit to beat Chinese Taipei 70-58 on Thursday. Korea's Kyongwon Kim was unstoppable, beasting his way to 26 points and 17 rebounds to lead his side to victory.

Earlier on the semi-finals, China exorcised the ghosts of recent senior-team defeats to Chinese Taipei by easily handling their neighbours 92-50. Chinese Taipei had no answer for China's duo of Rui Zhao (19) and Yuchen Zou (16), while Zhou Qi contributed 13 points and 17 rebounds off the bench. Only Yung-Cheng Sun (16) cracked double figures in scoring for Taipei. Iran were led by Navid Rezaeifar (18) and Mohammad Yousuf Vand (17) as they bounced back from a double-digit deficit at halftime to completely dominating the third quarter against Korea en route to a 78-60 semi-final win. Hyunwoo Jeon led with 16 points for the Koreans in the loss. 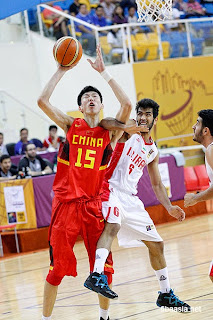 While the Chinese celebrated in Qatar, India's under-18 dream of continuing the same Cinderella success of their seniors was shot down early in the competition. After stuttering in qualifiers against Sri Lanka, India were placed in Group A of the tournament with China, hosts Qatar, and Malaysia. Despite the presence of the tournament's favourites China, there were hopes that good performances against the other two teams in the group could help see India go further than the past in the tournament.

Alas, India's performances dipped even further from their 10th place finish at the same tournament two years ago. India started off their campaign against the hosts Qatar. But despite a neck-to-neck first quarter, India were completely dominated in the second, being outscored 30-6 by their opponents. Down by 25 points at halftime, India pressed hard in the second half to make a comeback, but the damage had already been done. Qatar's Abdulrahman Mohammad Saad was unstoppable, tallying a breathtaking statline of 40 points, eight assists, and six rebounds against India. Abdelrahman Rehia Abdelhaleem added 26 and 10 rebounds as the duo paced the hosts to a 86-73 victory. Mahipal Singh had 20 points, six rebounds, and five assists for India in a losing cause.

India got their first and only win of the tournament against Malaysia early the next day. Although India started slow and turned the ball over several times, they bounced back from a small deficit in the first quarter to take control of the rest of the game. The duo of Gurvinder Singh Gill (24 points and 17 rebounds) and Mahipal Singh (22 points and seven rebounds) paced India to a 73-64 win. Yi Hou Wong scored 17 for Malaysia off the bench. 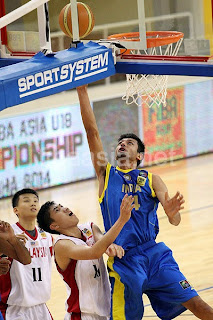 A month ago, China's Zhou Qi was part of the team which were surprisingly beaten in a historic win for India's senior squad at the FIBA Asia Cup. This time, Zhou Qi and the junior side were not messing around and went out to seek redemption. China dominated India on all fronts from the opening tip to the final buzzer, blowing out the Indians for a sixty-point victory. The final scoreline read 100-40 in China's favour, a lop-sided result that would come to haunt the Indians a few hours later. Zhou Qi paced the way with 21 points and seven rebounds for his side while Yuchen Zou added 19 and nine.

Right after India's loss to China, Malaysia played inspired basketball against the hosts Qatar to defeat them 78-70, and thus won their first-ever contest in the U18 FIBA ABC. This victory left India, Malaysia, and Qatar all tied in points behind China in Group A, with only two of teams able to progress and join the Chinese in the tournament's second round. Unfortunately, due to their worse point differential, India were the odd ones out. Despite their victory over Malaysia, India would finish fourth in their group and their tournament ended in sudden, heartbreaking fashion.

Because they didn't qualify for the Second Round, India played no further games and were adjudged to finish 13th in the tournament, tied with Iraq for last place (there was no 13/14th place playoff). 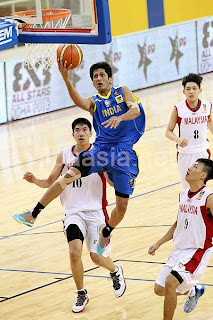 India also suffered some distraction when FIBA's 'No Headgear' policy sprung controversy again. India's Anmol Singh was made to remove his turban during warm-up of India's first game against Qatar. In their second game against Malaysia, Anmol was allowed to play with his turban for the first 10 minutes, before FIBA officials asked him to remove his turban again. The latest incident occurred a little over a month after FIBA forced two of India's senior team Sikh players - Amrit Pal Singh and Amjyot Singh - to remove their turbans during the FIBA Asia Cup. Back at home, the outraged Basketball Federation of India (BFI) once again complained to FIBA for this discriminatory policy and urged them to change the rules.

The tournament was a disappointing finish for a team which had the chance to prove that India's future could continue the optimism that basketball in the country had recently felt all around. While this team definitely had some talent, they showed a lack of maturity and experience, especially when they found it difficult to counter long periods of pressure and scoring runs by their opponents. There is no easy solution for this except the same thing that coaches and media in India have harped on for years: all our teams need more quality games to give them more experience of high-level play so they are better prepared for all international basketball situations in the future.

Captain Gurvinder Singh Gill (aka "Gary") finished as the team's leading scorer with 17 points per game and is a sure-shot to eventually graduate to the senior side in a few years. Another rising young talent - Narender - led the entire tournament fray in assists with 6.3 assists per game. He also finished top five in three-point percentage. Gill was a top five score in the championship. Of course, all of these numbers should be taken with a grain of salt since India only played three games. 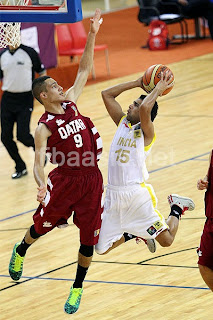 Apart from the win over Malaysia, there won't be any other positive memories for Coach Jora Singh and his side to bring back from Doha. But just like we hope to use positive results as a pedestal to propel ourselves higher, let's hope that this negative result can be used as motivation for all the players involved to bounce back stronger in the future.