Indian basketball superstar Geethu Anna Jose added another feather to her cap by being officially conferred the Arjuna Award - prestigious national award handed to sports-persons in India by the Government of India - by President Pranab Mukherjee at the Rashtrapati Bhavan in New Delhi on Friday, August 29. Jose became the 17th basketball player in India to receive this award, but only the first since 2001. She is also only the second women basketball player to win the Arjuna Award since Suman Sharma in 1991. 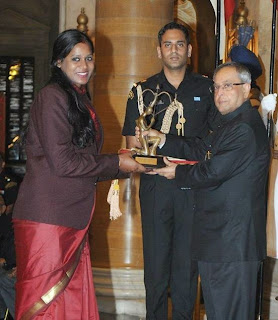 The Arjuna Award secured Jose's well deserved legacy as being one of the most dominant basketball players in Indian history. The 29-year-old Center from Kottayam, Kerala has been the centerpiece of India's national women's team for a decade and has been one of the top performers at the Asian level, performances which have included leading India to gold medal wins at the Asian Beach Games and the 1st FIBA Asia 3x3 Championship. Domestically, Jose helped Indian Railways win nine consecutive national championships. Jose has always played professionally in Australia and Thailand and was the first Indian player to earn trials with the WNBA.

"A Dream come true and a recognition for my family, coaches, well-wishers, seniors, juniors, and the BFI [Basketball Federation of India]," Jose said after receiving the award.

Jose was among 15 Indian athletes nominated for this award earlier this month. She was finally chosen by the Selection Committee after unsuccessfully sending in application for the Arjuna Award four times previously.

Congratulations to Jose: hopefully she can continue to inspire other young basketball players to pursue their hoop dreams and follow in her footsteps. And of course, we hope that she'll be back on court soon to continue adding accolades to her already-storied career.