Return of the FIBA/Headgear controversy: India's Anmol Singh forced to remove turban at U18 FIBA ABC


The 'No Headgear' policy of FIBA (the International Basketball Federation) has sparked another controversy involving a Sikh basketball player for Team India. This time, the ruling effected Anmol Singh, the only turban-wearing player of India's junior squad that is currently participating in the FIBA Asia U18 Championship in Doha (Qatar). 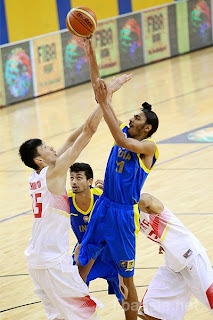 In a chat with TOI from Doha, national U-18 coach Jora Singh said, "Anmol was not allowed to play with a turban during our opening game against Qatar when the team was warming up. Today, he was allowed to play with the patka in the first quarter, but later on was told to remove it. Anmol then tied his hair with a small band and continued to play."

(via Times of India)

The latest incident occured a little over a month after FIBA forced two of India's senior team Sikh players - Amrit Pal Singh and Amjyot Singh - to remove their turbans in accordance with their 'No Headgear' rule in Wuhan (China) during the FIBA Asia Cup, a controversy that sparked the #LetSikhsPlay movement and since forced FIBA to review their ruling.

Currently, Article 4.4.2 of FIBA’s Official Basketball Rules states, "Players shall not wear equipment (objects) that may cause injury to other players," a list that includes headgear like turbans, hijab, etc.

The Basketball Federation of India (BFI) submitted a formal request to FIBA regarding the initial incident in Wuhan soon after, FIBA promised to review Article 4.4.2 during the FIBA World Congress, set to be held on 28-29 August in Sevilla (Spain) during the FIBA Basketball World Cup.

Unfortunately, until the 214 members of FIBA Central Board meet next week and decide on the future of this rule, FIBA's officials on the ground will be compelled to continue following the set rules.

But the BFI claim that there had been a misunderstanding regarding Anmol Singh at the FIBA Asia U18 Championship, which ultimately led Anmol removing his turban - or patka - particularly in Game 2 against Malaysia. "The FIBA Commissioner who was assigned to supervise the match initially had no objection and allowed Anmol Singh to play in the first quarter of the game with his patka, which is a religious right of the Sikh community," said the official BFI statement, "The basketball rule says that player shall not wear equipment or object that may cause injury to other players while playing. The patka is made of thin cloth which does not cause injury to anybody, as Sikh athletes are wearing in other team games. We are surprised that why this discrimination by FIBA Asia is being repeatedly imposed on Indian Sikh athletes representing the country at international level."

The Hindu has reported that India's Union Sports Ministry has also sought intervention from the International Olympic Commission (IOC) to resolve the issue. 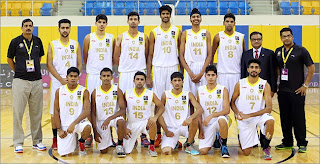 The BFI questioned the discrimination in basketball when other team games like volleyball, football, hockey, handball and cricket had no restriction on Sikh players wearing the patka.


The BFI's CEO Roopam Sharma has been nominated to attend the FIBA Congress in Spain to resolve the issue once and for all and "avoid such humiliation in future".

6-foot-10 Anmol, who plays backup Power Forward/Center for India, scored 10 points in India first game loss to Qatar. The next day, he played 16 minutes against Malaysia and shot just 1/4 for two points in the game. Nevertheless, Team India overlooked the distraction to bounce back and defeat Malaysia 73-64 in the contest.

Unfortunately, a day later, India were whooped thoroughly by China by 60 points and Malaysia scored a surprise victory over Qatar. With India, Qatar, and Malaysia all tied for second place in Group A, it was India that were knocked out because of their inferior point differential.

On court, India's juniors will be disappointed by this early exit: Qatar were a beatable side and the margin of defeat to China shouldn't have been allowed to run that wide. Hopefully the young players can recover from the setback and bounce back stronger.

Off the court, hopefully FIBA can bring an end to this whole senseless controversy next week. We need common-sense prevails over rudimentary thinking, so we can get back to basketball instead of worrying about whether a little bit of cloth covering someone's head could ever be a "threat". Especially if that bit of cloth has such a deep-lying significance to the culture and religion of the targeted individuals.
Posted by KARAN MADHOK at 09:42