The man who was once called The Magician of Basketball in India, the legendary Khushi Ram, passed away at age 77 on December 29, 2013. Ram will go down in history as one of the India's greatest ever basketball players and - at his time - one of the top talents in all of Asia. A former captain of India's national Men's team, Kumar was handed with the Arjuna Award in 1967.

While we live in a time when basketball players in India rarely get the respect and admiration that the sport deserves, Ram was one of the leaders of an era when Indian basketball was on the rise. Ram was an integral part of India's national team from 1964-72, and captained India in 1965 at their first ever appearance at the Asian Basketball Confederation Championship (now known as the FIBA Asia Championship) in Kuala Lumpur, Malaysia. India finished 7th at the tournament. He was the highest scorer at the championship (the only Indian at the Senior Men's level to be the tournament's highest scorer). In the next two Asian Championships in Seoul (Korea) and Bangkok (Thailand), he was the tournament's second and third highest scorer respectively. 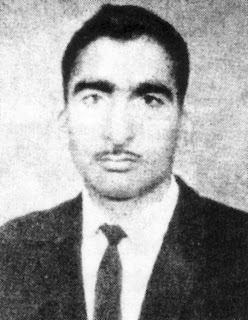 Ram was also the father of another Indian basketball legend, the Dhyan Chand Award Winner Ram Kumar, and of the late Asok Kumar.

Ram was born in Jhamri village in Rohtak district in Haryana on August 7, 1936. His interest for basketball began at age 14 when he joined the Delhi-based Army unit Rajputana Rifles as a Boy Recruit in 1950. He made his debut as a youth player at the National Basketball Championship in 1952 representing the Armed Forces team. From a young age, he was known for his shooting ability - which helped him become an unstoppable scorer for the course of his career - and for his high IQ and sense of the game.

From 1958-68, Ram was associated with the Army. The Armed Force team won India's National Basketball title 10 consecutive years, with Ram leading the helm several times as the tournament's best player. In 1969, he moved to Kota (Rajasthan) to join Shri Ram Rayons. He represented the state of Rajasthan for the next five years in National Basketball Championships.

Even until his final years, Ram was coaching basketball to students at the Modern School in Kota.

We wave goodbye to a pioneer of Indian Basketball, one of the greats to have paved the way for the path that all of today's players now follow. Ram received a lot of tributes for his achievements in his lifetime, but the most lasting tribute to his memory would be a concentrated effort by the basketball fraternity in the country to help India reach it's old glories again, and perhaps even shoot for a higher level than ever before.
Posted by KARAN MADHOK at 02:02