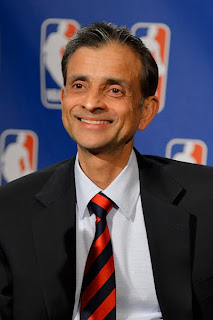 So get your head around this announcement. Sacramento Kings - the first NBA team owned by an Indian-born (Vivek Ranadive) - have signed a deal with Indian real-estate company the Krrish Group and Sacramento-based Mexican food chain, Jimboy's Tacos. The Krrish Group will open multiple franchises of Jimboy's Tacos in India. And the Kings will promote this relationship through in-arena, broadcast, and digital advertising. Win, win, win?

So here are the points of interest:

- Ranadive has made his intentions very clear in the past to expand the Kings' business relationships with India, and on the Kings' opening night this season, displayed a bonanza of Shaq-cricketing, cheerleader-Bollywooding, and curry concession-eating action. But this is their first official business partnership with an Indian company. "I am thrilled that The Krrish Group shares our global vision and sees the economic potential of a partnership with the Kings," said Ranadive. "Given the increasing popularity of basketball and the Kings in India, we hope that this will be the first of many important business partnerships from the region. As we strive to become India's home team, we are proud to call The Krrish Group and Jimboy’s Tacos our partners."

- The Kings aren't finished. The press release for this news made it clear that they'll be announcing several more business partnerships with India next season.

- Jimboy's Tacos who? The relatively small taco company might be known in certain parts of Sacramento, but none of my Southern California brethren had ever heard of them. Still, their website promises that they were voted "Best Taco" by Sacramento Magazine.

- No Del Taco, no El Pollo Loco, no Loteria. Even Taco Bell only has two outlets in India (I think), both in Bangalore. Jimboy's are somehow going to become the biggest American franchise of Mexican food in India. Vivek Ranadive is a valuable friend. "We are excited to be part of Vivek (Ranadive]'s 3.0 initiative as we begin our national and international expansion," said Karen Knudson Freeman, CEO of Jimboy’s Tacos.

- Who are the Krrish Group, apart from being a company named after a horrible Bollywood superhero franchise? They are a real-estate company, originally founded in 1983 as a liquor manufacturers. They are dynamic real-estate players in the Delhi-NCR region, are building skyscrapers in Sri Lanka, and own a team in India's badminton league.

- "The Indian consumer and retail market has literally been exploding during the last 10 years and the trend is projected to continue for many years to come, with the restaurant sector projected to grow more than double in the next 5 years," said Prakhar Gupta, Vice President of Business Development for The Krrish Group. "With a dynamic and fast growing business portfolio, we see our partnership with Jimboy’s and the Kings as a perfect opportunity."

Since purchasing the Kings earlier this year, Ranadive has directed a business philosophy coined "NBA 3.0," which focuses on investments in technology, globalization and deep community partnerships.

This is just the first step. Both Sacramento Kings fans and Indians should start getting more familiar with each other: there's going to be a lot more force-fed into this unlikely relationship in the coming years.

Speaking of force-feeding, DeMarcus Cousins must be really looking forward to this. Something tells me that he would be the perfect brand ambassador for all types of tacos.
Posted by KARAN MADHOK at 12:57