BFI, FIBA, & NBA get together to organize basketball coaching certification courses across India

To support the great hall of basketball in India, the game needs the strongest pillars to support it. And three of those pillars - the Basketball Federation of India (BFI), the NBA, and FIBA, have joined hands between December 2013 - February 2014 to bring expert training to India's most influential basketball coaches. These efforts will help build a link so the chosen coaches can then pass on to other coaches and young players across the country, thus lifting the quality of the game nationwide. 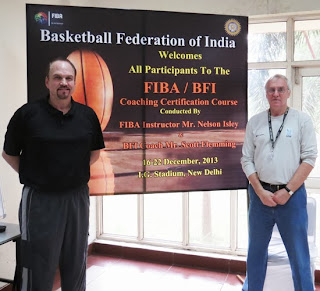 120 Indian coaches from four zones around the country will receive the FIBA Level 1 Coaching Certification as well as BFI Certification, thus enriching their knowledge of teaching fundamentals to the youth. The coaches were selected strategically based on the curriculum's content. The curriculum is based on FIBA's “Basketball for Young Players” book & CD for U13-U18 age players.

During the clinics in each zone, experts from FIBA, the BFI, and the NBA are pitting their talents together. FIBA's experienced coaching instructor Nelson Isley and NBA-India's Senior Director of Basketball Operations Troy Justice are conducting the FIBA Level 1 Coaching Certification programme. The BFI's head coaches for India's Senior Men's and Women's team - the American Scott Flemming and the Spaniard Francisco Garcia - will be conducting the BFI Certification Programme.

Representing India's West Zone, the first of the clinics was held in Mumbai - at Don Bosco High School, Matunga - from December 8-14, 2013. New Delhi is currently hosting the courses for the North Zone at the KD Jadhav Indoor Hall from 16-22 December 2013.

In February 2014, cities from India's South and East zones will be chosen to host the certification courses, too - dates and cities are yet to be officially announced.

Speaking from the Coaches Certification programme in New Delhi, FIBA Coaching Instructor Nelson Isley said, “I am very satisfied with the attendance of the Indian coaches at the clinic. They have shown a lot of interest and are open to learning new basketball coaching techniques. It has been a very positive experience for me in India.”

Isley has been associated with FIBA since 2000. He has over 4 decades of coaching experience and conducting national development programmes, and has taught FIBA coaching clinics in Iceland, Mozambique, Swaziland, Nicaragua, Guatamala, Haiti, Spain, Chile, Bolivia, England, Zimbabwe, El Salvador, Tanzania, Ethiopia, Jamaica, Maldives, and Canada among other countries.

Flemming has been Head Coach of India's National Basketball Men's Team for a year. Prior to that, he was Assistant Coach of the Texas Legends in the NBA Development League. Garcia has been India's Women's National team coach for six months, and has 22 years of coaching experience across clubs in various European countries. Justice has spent several years in India spearheading NBA's programmes on grassroots level with coaching clinics, tournaments, and much more.