China's young stars were at the top of their game as they stole the show in Colombo (Sri Lanka), defeating Japan in the Final to capture gold at the 3rd FIBA Asia U16 Championship for Women on November 30, 2013. It was China's second gold at the competition, and their 62-50 triumph held Japan from repeating after their 2011 triumph. 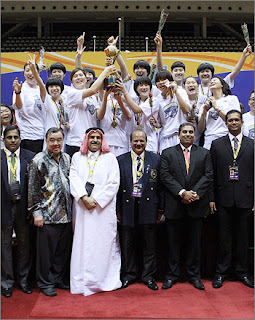 For the second straight iteration of the tournament, India finished fifth with a 2-4 record and continued to solidify their stake as Asia's best women side after the dominant top four of China, Japan, Korea, and Chinese Taipei.

China used a balanced and defensive strategy to overwhelm Japan in the Final, bouncing back from a 17-9 deficit at the end of the first quarter to take a halftime lead, and then stretch out their advantage to a 62-50 victory.

Earlier on Saturday, Korea cruised past Chinese Taipei to a 86-64 win to secure third place. Heji Ann had a triple double for Korea with 22 points, 11 assists, and 10 rebounds, while Yejin Kim added 19. Yu-Lien Hsu (19) and Jing-Ting Wang (18) were the leading scorers for Chinese Taipei.

In the semi-finals stage, China showed no mercy as they put up a dominant 81-55 win over Korea, led by Haimei Wang (19) and Dilishati Dilana (17). Japan also joined them in the Final with a big win against Chinese Taipei, 99-60. 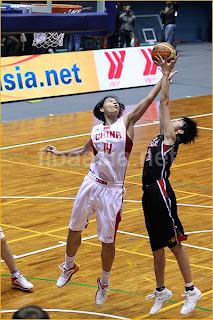 Placed in Level I with Asia's best, India were expected to play the role of minnows in the Preliminary Round, and started with their worst defensive performance, losing 112-45 to Japan.

India didn't get much better a day later against eventual champions China, who rode behind the efforts of Zhen Wang (24) and Jia Niu (21) to dominate from end to end and win 109-51.

India's most crucial encounter came in their third game, against Malaysia. They needed a win to secure at least fifth place, and started well, leading 29-24 at halftime. But Malaysia bounced back to tie the game at 43 by the end of the third quarter. In a neck-to-neck final period, India outlasted their opponent and survived to a secure a close 57-55 win.

India were back to losing ways as Chinese Taipei were the next team to exploit India's defensive deficiencies 105-50. Yu-Lien Hsu had a game high 24 points. 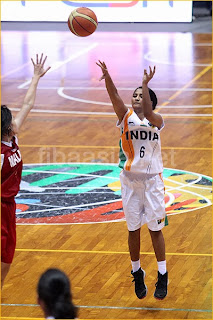 In their last Preliminary Round game, Yebin Yun had 23 points and eight points to lead Korea to a 106-56 win over India, who then finished at fifth place in their group.

India had to play one last game in the tournament to ensure that thy would return to Level 1 for 2015 against Level 2's second-place side Kazakhstan. They had their best showing, as three Indian players scored 20 or more points - Riya Verma (24 points), Bhandavya HM (23 points, 12 rebounds), and Srividhya Venkataraman (20 points, 11 rebounds). While the game was tied at 36 at halftime, India took charge of the third quarter to take a 11 point lead, and finish the game to win 84-71. Anastassiya Arzamastseva had a valiant performance (21 and 15) in a losing effort for Kazakhstan.

While Coach TD Biju's side showed some great performances against lower-seeded sides, they don't seem to have made any progress against the top teams who have a stronghold at the top of standings. Bhandavya HM and Riya Verma have showed the most potential for the side and could grow to be regulars for India's future senior teams.