NBA Champion Chris Bosh is in India from July 16-19


Nearly a month ago, we revealed on this blog that none other than Sir Christopher Bosh, now back-to-back NBA Champion with the Miami Heat, will be visiting India over the off-season. Ripples of excitement obviously caught on with a lot of Indian NBA fans, who haven't welcomed an active star of Bosh's stature since Dwight Howard and Pau Gasol dropped by three years ago. And now, finally, we have more exacting details about Bosh's trip.

Bosh will be in India - visiting only the city of Mumbai - from July 16-19. The NBA revealed more information about his trip in their recent press release:

Bosh will be the 22nd NBA or WNBA player or legend to travel to India since 2006.

“I am excited for the chance to visit India and help build interest in the game I love,” said Bosh. “The NBA is a global game and I hear that basketball is becoming pretty popular over there so I am looking forward to teaching kids that may end up in our league one day.”

"Chris is a dynamic player and personality, and will be a huge hit with our fans,” said Heidi Ueberroth, NBA President, International. “The popularity of basketball is growing in India and we're thrilled that Chris will take part in youth development and community activities as part of his visit to Mumbai.”

Schedule of Bosh’s activities in India:

Mumbai Tour: Bosh will tour famous sites in Mumbai. His tour will be captured by Sony and NBA Entertainment and featured in NBA programming on Sony SIX.

Larry O'Brien Trophy Tour: Bosh will bring the NBA championship trophy to India and give fans a chance to take pictures with it.

Press Conference: Bosh will help the NBA and Sony announce the launch of a unique NBA basketball and entertainment event in India.

Elite Development Basketball Clinic: Bosh will conduct a clinic for some of the top basketball players in India. He will also conduct clinics for youth of all levels at a local school. 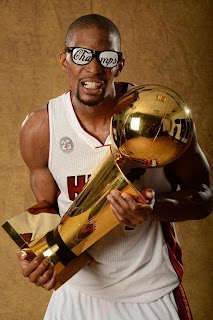 The NBA and Sony are also running the "Namaste Bosh" Fan Contest, where, through digital and social media promotion, they are asking fans fans to submit entries on how they would welcome Bosh to India. SONY will develop a localized promo and song to encourage fan participation. The league and Sony will use the hashtag #NamasteBosh across all media assets to promote. Fans with the most passionate and creative submissions will get a chance to meet Bosh. In case your lifetime dream is to listen to a weird Hinglish rap about Chris Bosh, consider yourself blessed and check out this SONY Six ad right now.

Bosh's visit to India is great news: the presence of a current All Star player was long overdue for India, and Bosh being recently crowned champion, and playing with two of the league's most popular players LeBron James and Dwyane Wade, will add to the excitement of the local fans. It seems like his schedule seems quite well stacked and he will be able to crunch in a lot of experiences in his short time here. Kudos to the NBA for promoting this event the right way too: this is the most publicity that any upcoming player visit has gotten for India so far.

So what are you waiting for Mumbai/nearby-area fans? Stick out your 'Boshasaurus' necks and go out and say Namaste to Mr. Bosh next week...
Posted by KARAN MADHOK at 15:22