India’s U16 Boys’ Basketball team won all their games at the SABA Qualifiers in Dhaka and thus sealed their spot in the 3rd FIBA Asia 16 Championship. India came on top of the four-team qualification event that was held from July 3-5, defeating Maldives, Nepal, and hosts Bangladesh on Friday to finish with a 3-0 record. 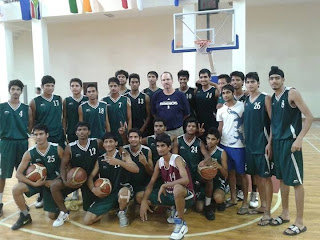 Led by coach Raghavendra Singh Gour, India’s 12-man roster featuring some of the country’s brightest young talents had no troubles against their South Asian rivals, winning each game by an average of 53 points. Here are the final results:

Bangladesh finished at second place and Nepal came in third after defeating Maldives in the bronze medal game on Friday.

The third edition of the FIBA Asia U16 Championship is set to be held in Tehran (Iran) from September 25-October 4. It is a qualifying tournament for the FIBA U17 World Championship. India will have good memories of the previous U16 FIBA ABC. Two years at Nha Trang (Vietnam), India’s squad led by behemoth talent Satnam Singh Bhamara broke out into the scene and gave some of Asia's finest squads a scare. India couldn't improve on their 10th place finish, but showed much-improved performances on court. There’s no clear-cut talent like Bhamara around anymore, but hopefully, the current team can play well together as a unit to surprise Asia's finest once again.