This feature was first published as the cover story in the 111th edition (2013 - No. 14) of SLAM China Magazine. Here is my original English version of the story.

Everything had to be perfect. 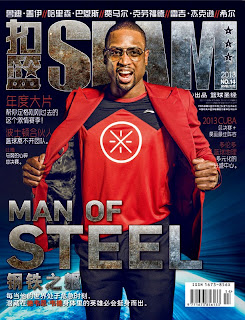 Dwyane Wade’s red blazer had to match his new fiery-red shoes. It had to be left unbuttoned, to show off just enough of the red and black T-shirt he wore inside. The frame of his sunglasses had to match the colours of his suit. The background had to merge with everything together, and the intensely bright lights that shone on him at the photo shoot in Shanghai had to amplify the superstar that shone brighter than all of them.

He sat down for a different shot, taking a seat that would signify his throne. And he took the look of a man who had reached the top of the scale with fiery competitiveness, and yet, exuded the calm of a philosopher-king, of a man at complete ease, or at peace, with his success.

He folded his palm and pinky finger in to throw up his index, middle, and ring fingers up. The number three. On his throne, one of the Kings of the NBA had just won his third championship, and now, here he was celebrating the magic number.

And at guard… standing at 6-foot-4 from Marquette… Number 3… Dwyaaaaaane Waaaadddee!

The Miami Heat are back-to-back NBA champions, and feature perhaps the best basketball player in the world and his name is LeBron James, the man who has been the league’s MVP and the Finals MVP in the last two championship seasons. When the Heat make their pre-game introductions, LeBron is called first, and they always save Dwayne Wade for last. He may not be the Finals MVP or the scoring champion that he once was, but Wade continues to be the heart and soul of the Heat franchise, the man who has had a major role in lifting all three of the Miami Heat championship trophies.

There is another subtle significance in calling Wade out last, as the explosive – if injury-riddled – guard has made a career out of becoming the kind of player who saves his best moments for the very end. 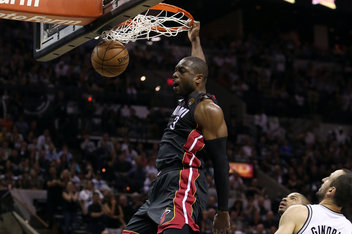 Like the time when, as a rookie for the Miami Heat in 2004, he hit a game-winning shot in the last seconds of the first-ever playoff game of his career.

Like the 2006 NBA Finals, when he saved his four best performances to date for the last four games of the year, defeating the Dallas Mavericks four times in a row after going down 2-0 in the series to lift his first NBA Championship.

Like how he continued to script out a career as one of the game’s greatest clutch players, owning the fourth quarters and dying moments of close games, taking the last shots, making the game-changing defensive plays, and helping to keep a poor Heat team relevant through the tough years that followed his first championship. In the process, he became a yearly entrant into the NBA All Star team, was always hovering around the All NBA Teams, and in 2008, became an Olympian. Despite coming off a serious injury, Wade dominated the 2008 Beijing Olympics to lead the team in scoring and tallying a game high 27 points in 27 minutes of the classic final against Spain to win a gold medal.

Already confirmed his seat amongst the NBA’s greats, Wade then changed the course of history altogether when he recruited LeBron James and Chris Bosh to join the Heat in the summer of 2010. The Big Three was born, and Mr. Number Three, Dwyane Wade, was in the middle of it all.

Since then, the Heat have been to three consecutive NBA Finals and won two more championships, bringing Wade’s tally to three in total. With each passing year, he has given more and more of the team’s helm to LeBron while becoming a support player on his own squad. It is a unique situation where the team’s leader is not their best player any longer. Through injuries, age, and LeBron’s sheer brilliance, Wade has been forced to settle for the role of the NBA’s most dangerous sidekick. But with championships piling up, it seems to a role that he has no trouble accepting.

Many are still in awe of watching LeBron and Wade run in the same team together. True, advance stats prove that the two are perhaps most efficient in a lineup when either one of them is on the floor, but in the rare moments when both of them are functioning at their highest level, the Heat become a juggernaut of historic proportions. Wade’s improvement was a major reason why the Heat won 27 consecutive games this season. And it was his ability to bounce back from injury struggles at crucial moments that aided to their tough second championship. 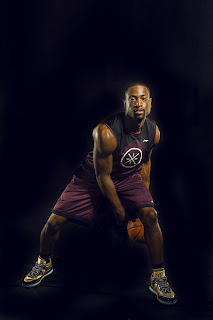 The defining characteristic of Dwyane Wade’s career hasn’t been the big picture, but the small moments that complete the big picture. Wade has long had the reputation of being the game’s ultimate ‘switch’ player, someone who goes into the highest gear at the most crucial moments. From college, like his much-publicized triple-double against Kentucky in the Elite Eight, to the 2006 Finals, to the Olympic Games, and in small moments in every other season. This included 2012 playoffs when, with the Heat down 2-1 to the Indiana Pacers, Wade had his ailing knee drained and came back to completely dominate the next three games to take the Heat into the Conference Finals.

This year, Wade seemed a shade of his former self during most of the playoffs, once again falling victim to the injuries that have long cursed his career. Still, he became the spark for Miami just when they most needed him. He capitalized on the moment to takeover in the close-out Game 5 against the Bulls in the second round. He upped a gear to vanquish the Indiana Pacers in the close-out Game 7 of the Conference Finals. He saved his best performance of the season for Game 4 of the NBA Finals, to save the Heat from going 3-1 down and instead, bouncing back and leveling the series against the Spurs at 2-2.

The Heat were given a second shot at life when they miraculously came back to win Game 6 of the Finals. On the day of Game 7 – the last and most important game of the year – Wade had his knee drained and went through eight hours of game-day therapy. On the night when LeBron brilliantly led the way to a Heat win, Wade also played 39 minutes, scoring 23 points and grabbing 10 rebounds to seal the championship.

Soon after, he changed his Twitter name to simply ‘THREE’. He celebrated with his teammates, and twisted his fingers to throw up the number three to celebrate his own achievements.

The ‘three’ is still up, nearly a month after his championship. He’s far away from the shores of South Beach, but those who welcomed him in Beijing, Guangzhou, and Shanghai recognize the significance of that number.

Back in our photo shoot in Shanghai. Wade may have clearly been the sharpest-dressed individual in the studio, but it is those who surround him, in simple white T-shirts, that somehow catch our eye. Their Li Ning shirts all bear the same three letters bearing Wade’s motto for his newest life venture: ‘Wade of Wade’. The motto has become a rallying cry for the star who is charting his own path into greatness. 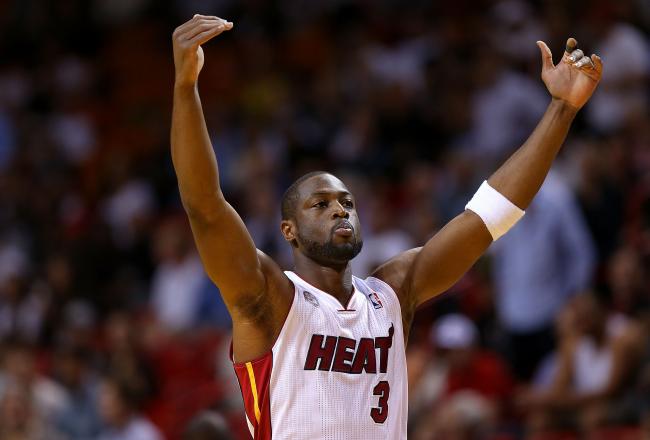 Last off-season, Dwyane Wade became the biggest NBA superstar to join the Li Ning roster, leaving behind his previous American shoe deal for this surprising and path-breaking new move. To conservative minds, this could be seen as a risky new endeavour for both sides: Li Ning because of Wade’s age and injury, and Wade because of Li Ning’s relative inexperience in untested waters. But for as long as Number Three continues to rack up championships and make game-changing moments, he will continue to be a relevant force around the world. And in the process of success on court, he’ll be able to carry the ambitious young Chinese company to relevancy with him.

After another long season that lasted until the third week of June, followed by championship celebrations and a tour of China, Wade has vowed that he will be giving his knees some much-needed rest. And those knees need the rest as much as he (and his team) needs those knees. His physical, swash-buckling style of play has made him one of the most dominant and exciting players in the league, but it has also accumulated several niggling injuries throughout his career. As he gets older, he will have to evolve his game to remain amongst the league’s elite and help keep his team in the championship hunt. In a recent interview with USA Today, he mentioned the need to change his game and become a consistent outside shooter for the future.

That will be one of major questions looking ahead in the career of a player who has never quite excelled in the outside shot throughout his career. The other question concerns not his own status as a player, but the status of the teammates around him. By 2014, the contracts of the Big Three in Miami are set to expire. With more stringent tax rules, it would take highly creative planning to extend LeBron, Wade, and Bosh in Miami together for a few years.

For now, the immediate concern is the near-future. There are going to be many obstacles in their way to another championship: Derrick Rose returns to bolster the Bulls, the Pacers will be hungry and motivated for another shot at Miami, the Nets have made key off-season acquisitions to align themselves for a championship run, and Carmelo Anthony will ensure that the Knicks trouble them in the East too. Out West, the Spurs will be back as ever, Durant and Westbrook will keep the Thunder in the run, the Clippers will be dreaming big, and the Rockets will hope Dwight Howard can make them into contenders. Wade and the Big Three will have to be well-rested, and with all three in their contract years, they will need to produce another historic season if they are to complete their three-peat.

Yet, the philosopher-king seems to be taking it all in his stride. On his throne, fighting for the status of NBA royalty, and still in peace as the mastermind behind his past, present, and future successes. Right now, three is the magic number for Wade, and everything in his world is once again perfect.

But we can be rest assured that he is already thinking about number four…
Posted by KARAN MADHOK at 18:59