Alvida Bosh: A Bosh-tastic trip comes to an end in India


Can you believe that it only lasted four days? Less than a month after winning his second consecutive championship with the Miami Heat, eight-time NBA All Star Chris Bosh came to India for the first time on July 16, spending four very productive days in Mumbai. Dozens of NBA players, WNBA players, or former stars of the game have already visited India in the past, a list that included All Stars like Dwight Howard and Pau Gasol in 2010, but Bosh's trip this year was by far the most engaging for NBA fans in India. 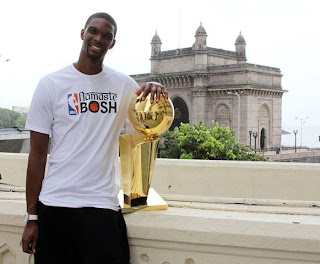 NBA India has existed for over half a dozen years already, already feature an India-centric website (with weekly features by yours truly), a hugely popular Facebook page, a brand new office in Mumbai, dedicated staff that travel around the nation preaching the gospel of hoops, and a plethora of different annual events around India including grassroots leagues and fan interaction festivals to promote both basketball and the NBA. But they made their biggest splash - promotion-wise - with the Bosh visit, and have perhaps been able to truly expand their fan-base beyond the niche hardcore hoop-heads to the larger mainstream populace of India.

Bosh, known back in his homeland for being one of the league's great big men, the third star in the NBA's most successful team, and a world champion photo-bomber, brought his energy to Mumbai for four jam-packed days. Here is a selected recap of his Bost-tastic trip, as he left India last night:

- Before Bosh showed up, NBA India and their broadcast partners Sony SIX ran the ingenius '#NamasteBosh' campaign on Facebook/Twitter and on the TV channel, to get fans hyped up and create a competition where the fans with the best greetings to Bosh would get to meet him in Mumbai.

- Then, Sony SIX created one of the greatest things ever with the #NamasteBosh Hinglish rap song. "Namaste Bosh... Namaste India..." has been stuck in my head for days. 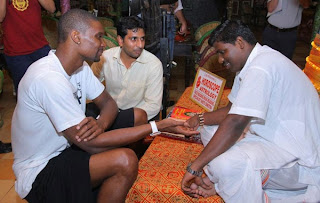 - Bosh finally showed up in Mumbai with his wife and got to work/tour on July 16th. He toured several sites across Mumbai, including the Dhobi Ghat at Cuffe Parade and the famous Gateway of India.

- Oh, and he brought along a replica of the Larry O'Brien Championship trophy with him, too.

- Bosh tried some Indian food and had his fortune told by a palm reader.

- He also headed out to Mumbai's famous Times of India office building where he served as a guest editor in TOI's Sports Page for the next day (remember that two years ago the NBA announced a digital partnership with the TOI group) and answered questions in a fascinating, detailed interview about the NBA Finals, on LeBron James, on Heat fans, and on basketball in India. 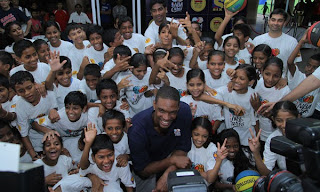 - Day 2 was a chance for the Indian media to interact with Bosh in lengthy one-on-one interviews, where he spoke about how Indian Basketball is growing every year, how basketball can make space for itself in India despite cricket being number one, and about introducing the element of fun when promoting hoops to the Indian audience.

- Bosh also announced the new season of the NBA Jam - a basketball and music festival - in four Indian cities, which will be held through September.

- And by the end of the day, he ended up socializing with some fringe Bollywood types, including Dino Morea. And this was all just Day 2.

- On Day 3, Bosh quit all the touring and talking about basketball and got down to basketball itself. This was the day that he first held an Elite Development Basketball Basketball Clinic with up-and-coming young players of the country. 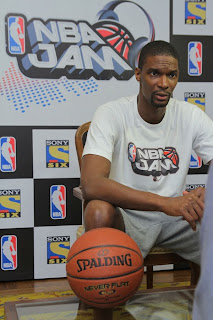 - This clinic was held with NBA Cares event at the Magic Bus camp, an NGO dedicated to mentoring less-fortunate children, who have been involved with NBA Cares for the past few years in Mumbai. Bosh shared some of his basic knowledge and basketball drills with the kids of Magic Bus, too.

- At the Don Bosco School in Mathunga, fans from the city were given a chance to drop in and have a chance to meet Bosh.

- On this day, Bosh also made an appearance at Radio One Mumbai for a chat with RJ Rishi K. The interview aired the next morning on Radio One.

- July 19th was his last day in the country. NBA India had asked their fans on Facebook to send questions for the big man. On this day, my NBA-India co-blogger Akshay Manwani sat down with Bosh for an interview where he also passed on many of the fans' questions. 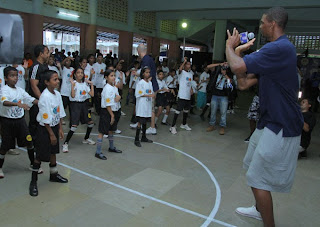 - Later, made a visit to the Wilson College in Mumbai to tip off their annual festival (Polaris), where he interacted with students and gave away some of those awesome '#NamasteBosh' T-shirts.

- And so, his trip came to an end on Day 4. Of course, fans across the country would've wanted Bosh to visit other cities like Delhi, Bangalore, Chennai, Kolkata, Hyderabad, and more, too. While Bosh couldn't see any of India outside of Mumbai, those in India's largest city got a heavy dose of the NBA star, as he was basically everywhere, and talked about basically everything.

India gave a pretty memorable greeting to Bosh, so this particular 'Namaste' would be remembered forever by both sides. Now, it's time for us to say 'Alvida' to the big man, but since Kishore Kumar taught us never to use that word, maybe we should say 'Phir Milenge' Bosh. Come visit India again. And bring along a couple of your famous friends next time, too.