Locked out NBA players should play a 1-on-1 tournament, Part 1

Go ahead and mourn first: The NBA is in a lockout. The owners gave the players a terrible collective bargaining agreement 'final' offer. Yesterday, the player's rejected the deal, dissolved the union, and are now threatening to take the matter to court. The 2011/12 season which should've begun 2 weeks ago is still locked out, and it seems that, with the court battles and the chaos that is now following, we are a long way away from seeing NBA basketball again.

No matter what side you think is the bigger 'villain' here, I think both share some fraction of the blame for this 'nuclear winter'. But one thing is clear to me: the NBA is famous, and thus the players and the owners are rich, mostly because of the players. Not anything else. The Cleveland Cavaliers weren't a popular team because of their owner, Dan Gilbert, they were popular because of LeBron James. With him gone, I wonder how many former 'fans' are rooting for the owner. Fans like players, and therefore, the players need to prove that it is they who have the power to draw more fans.

Now, few voices spoke out in support of NBA players creating their own, separate basketball league if they can't agree on a deal with the NBA. But this kind of operation is much easier said than done, especially in the short term. The NBA is too well-organised, connected, and popular around the world: any new league created by the players will of course be attractive, but still, it would take a long time before it will reach the standards of the NBA. It will have problems with the infrastructure, TV deals, etc etc. Plus, it would be a long time before a league like this would be organised enough to take off, and honestly, by then, they might as well fix their problems with the current NBA.

The players have tried other ways to play basketball and enjoy their 'freedom' from the NBA during the lockout. They have taken part in streetball championships, in numerous box-score stuffing charity games, and even planned (and failed) to take part in an All Star World Tour. These charity/streetball games are exciting for a while (OMG LEBRON CARMELO WADE PAUL MELO ON THE SAME TEAM OMG!!!) but eventually, they get boring and useless, since their is little at stake in terms of competitiveness and player legacy.

So here's my ultimate solution to the current state of affairs we find ourselves in, a solution that will help temporarily satisfy the NBA fans, give the players a competitive platform to flaunt their star power, and of course, satisfy the behind-the-scenes sponsors who would like to continue promoting their brands with the big-name players they pay:

The NBA's best players need to take part in a first-of-its-kind, historic, 1-on-1 tournament.

First off: 1-on-1 basketball is not REAL BASKETBALL. Let's get that straight. Basketball, in its purest, and most beautiful form, is a 5-on-5 unselfish, full-court game, where ideally every person on the court runs, passes, scores, rebounds, and defends with equal effort.

That said, for a short time (perhaps just 4-5 days), a tournament like this will be incredible. Every NBA player has played 1-on-1. As a matter of fact, every living, breathing soul who is a casual or a serious or a professional basketball player has played 1-on-1. It is not the purest form of the game, but it's still a fun form. I want to see 32 of the league's best players (will explain that number why later) play in a short tournament to decide the league's best 1-on-1 player, and thus win bragging rights to call themselves the 'best player', too. There is too much peace and love in today's NBA, anyways. With money and hype over everything, players don't go hard at each other individually that much anymore.

Case in point: LeBron James vs. Kobe Bryant, everyone's favourite 1-on-1 dream scenario. Yes, they have very different styles, and yes, they are in different stages of their careers, but Kobe and LeBron are nearly the same height, play nearly the same position, and are the league's most popular, divisive, and amongst its most talented players. Most NBA fans are either on the Kobe corner and on the LeBron corner. The 'who's better' argument has been raging for years, with no way of truly finding an answer. Same goes for other similar players, such as Deron Williams vs. Chris Paul, Derrick Rose vs. Russell Westbrook, or Kevin Durant vs. Carmelo Anthony. Or how about, players in the same NBA team for a pinch of drama: LeBron James vs. Dwyane Wade, Carmelo Anthony vs. Amar'e Stoudemire, Kevin Durant vs. Russell Westbrook. This is a chance to really play out those countless video game fantasies that you have been harbouring.

How to 'make it happen', though? Here is the main stipulation that will have to be taken into consideration: The players will have to ignore the risk of injury and the perhaps bigger risk of public embarrassment. With no NBA future on the cards, this may not be as far-fetched a stipulation as you may think.

There are a multitude of sponsors who will be able to fund this type of massive event, especially since many of their sponsorship deals are suffering with the absence of an NBA season. I had first considered shoe companies like Nike/adidas, but they have too much power over who plays or doesn't play and may try to only field players signed under their banner. No worries: there are plenty others, and this is a lucrative venture. What will make it even better is if the proceeds go to charity.

The tournament doesn't need to be stretched out longer than a 4-5 days, as with the format I'm about to suggest later, any player will play a maximum of only seven short 1-on-1 games. ESPN can broadcast it (hey, they broadcast the friggin' Decision).

Now, I was thinking about what would be an ideal venue for an event like this, and I thought no further than Las Vegas. The city of Vegas has already been rumoured to be a future destination for an NBA team. The 2007 NBA All Star Game was held there. Players head to Vegas for the Summer League before every season (not this one, though!). And of course, the 'Impact Basketball League' was held in Vegas two months ago. It will be a neutral floor but a place which will guarantee investor interest.

And the fans - I'm sure - will watch this tournament in flocks. Fans will watch it in the arena, watch it on TV, see highlights on YouTube, and discuss it on blogs and social networking sites in great numbers. We're DESPERATE. And the only thing second to the news that the real NBA season is returning will be the news that the NBA's best players will be putting their talents, their egos, and their legacies on the line against each other. Because, let's face it, 1-on-1 basketball is the ultimate ego-showcase. No one has to pretend to win for the team anymore. It's going go be every man for himself, a prospect that will create unique drama like never before. Hell yes, the fans will be excited. There are too many arguments to settle here.

Now, on to the tournament rules. I'm going to unabashedly steal from a very simple and efficient, tried-and-test format: the FIFA World Cup. The World Cup has 32 of the best teams, divided into eight different pots of four teams each. Each team plays three games against those in the same group. The best two teams from each group goes into the knockout stage. The knockout stage starts with the Second Round (16 teams), Quarter-Finals (8 teams), Semi-Finals (4 teams), and Finals (2 teams). I think this is a good and fair system, and it means that a participant plays a maximum of seven games. 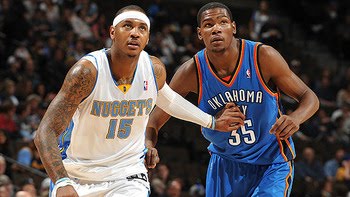 In the middle of this tournament, I also propose a Slam Dunk competition and a Three-Point Shoot-Out. Why not?

I propose that in each game, a coin toss wins starting possession. The games will be on the half-court, of course, and after each basket, the possession will start from the three-point line. I want the players to play the 'loser's ball' system, meaning the player who has just scored will then have to defend his opponent in the next start of possession. The scoring will be normal (two pointers, three pointers, 1 point for free throws) up to 21. But I'm willing to give the players 15 minutes max, after which the game stops and the higher score wins. There will be no breaks/time-outs. If scores are tied at the end of regulation, add three more minutes of overtime.

A big issue in 1-on-1 games is fouls: I want the foul calling to be much laxer, meaning, only rough and very obvious fouls should be called. Any shooting foul will be free-throws, as normal. But to stop players from fouling bad free-throw shooters too much, I want to set a five foul limit - any player who fouls five times will give up 1 point to his opponent.

So there it is: these are my proposed scenario and rules for my dream 1-on-1 tournament. But I'm not done, because why dream up such an incredible scenario and not dream of how it would play out? That is why this is just Part 1 of this story. In Part 2, I'll pick the 32 players who will be making the cut, divide them into the groups, and then, based on the style of the 1-on-1 format, play out the entire tournament.

So for all the times that the NBA promoted the 'There can only be 1' ads, we will finally have an appropriate platform for determining the last '1' standing. Yes, this is indeed going to be epic.
Posted by KARAN MADHOK at 13:25