The NBA is in a lockout. The game of basketball certainly isn't.

Sure, what the NBA provided was the perfect platform for the best basketball players in the world to compete at the highest level. And sure, I'm mildly disturbed every second without NBA hoops this off-season, and perhaps for the locked-out 2011-12 season. But as we've been hearing over the last month or so - NBA players aren't exactly on strike against basketball. NBA players have been going international and hitting the streets hoops scene regularly during the off-season, showing their commitment to keep improving their game or keeping that competitive fire burning within them. The European players in the league haven't even had to try hard for high-level hoops action, as the 2011 Eurobasket is providing them just that.

But then came along a novel idea that is sure to provide a little more respite to hoops-starved fans. As Howard Beck of The New York Times reported a few days ago, more than 40 NBA players will get together in an unofficial 'Lockout League' in Las Vegas from September 12 - 23rd (just 12 days, I know, but better than nothing!). Players from the Knicks, Rockets, Clippers and many more will be joining this competition, which will be officially called the Impact Basketball Competitive Training Series: the only things that it will share with the NBA are NBA players and basketball!

Some of the big name players competing will include: Chauncey Billups, John Wall, Zach Randolph, and Stephen Jackson.

Here is more information from The New York Times:

The site will be the Impact Basketball gymnasium, about two miles from the Strip. The unofficial commissioner will be Joe Abunassar, a longtime trainer of N.B.A. players. More than 40 players, locked out of NBA facilities because of a labor standoff, have committed to play.

As many as eight teams, featuring seven or eight players each, will play daily starting Sept. 12. The series will end with two days of playoffs, with a championship game Sept. 23. Games will be officiated and played under NBA rules, albeit with 10-minute quarters and without coaches barking from the benches.
The plan is to sell tickets (about 500 a day, with proceeds donated to charity) and to stream the games live on the Internet. 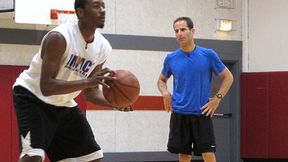 Teams will be assembled with an eye toward parity and with an emphasis on keeping N.B.A. teammates together. Billups will probably be joined by his Knicks teammates Shawne Williams and Iman Shumpert. Another roster will feature at least four Rockets: Kyle Lowry, Chuck Hayes, Chase Budinger and Courtney Lee. Mo Williams and DeAndre Jordan of the Clippers will form the core of a team, with hopes that their teammate Blake Griffin, last season’s rookie of the year, will join them.
Others who have committed include J. J. Hickson of the Kings, Eric Maynor of the Thunder, Al Harrington of the Nuggets, Jermaine O’Neal of the Celtics and Jared Dudley of the Suns.
Box scores will be kept. Standings will be posted. The stakes may be minimal, but the egos will be active. The competition level should be much higher than the typical summer exhibition.

If all goes well in Las Vegas — and if all goes poorly at the bargaining table — Abunassar will stage another two-week series in October, he said. And in November and December, if necessary.

Nice work, Mr. Abunassar. Even though I would rather wish that the NBA Lockout ends and your league doesn't work out, I'm glad that some sort of challenging and competitive basketball is coming our way. I will obviously be supporting the Knicks'-heavy squad, and it will be great to see games in which defense will actually matter!

Hopefully the Impact Basketball League is a success - And for the next time this league is held (if there is a next time), bigger name stars get tempted to join in and make it an even more exciting event.
Posted by KARAN MADHOK at 16:55