An eventful basketball showcase at BFI’s Junior Expo in Delhi

The youngest kids were just eight years old, each with hands so tiny that even all ten fingers wouldn’t be enough to get the grasp of a large basketball. Standing opposite them were the specialists, ‘All Star’ basketball players to whom the art of dribbling a basketball came as easily as walking. In between, there were youngsters of every level, experience, and proficiency of the game. But to each of them, this day was about just one bottom line: having fun with the game of basketball. 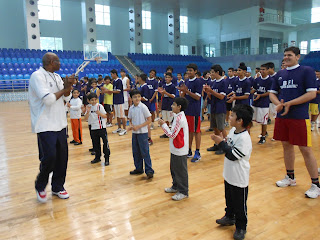 On Tuesday, Kenny Natt, the American head coach of India’s Senior Men’s Basketball team, hosted the BFI Junior Expo, organised by the Basketball Federation of India (BFI), at the Sri Ram College of Commerce (SRCC) in New Delhi. The event was an exhibition of the talents of India’s finest Junior (U18) players, who had come together in the capital city for a grueling month of camp with Natt throughout November. The expo was a fitting conclusion, not only for the coach to see how much the youngsters had improved after the time spent with him, but also for the players to prove to the coach that they belonged to represent India at the highest level. 26 of the best performers at the camp were chosen for the U18 All Star Teams at the Expo on Tuesday, and Natt had hinted that their performances at the Expo could go a long way in ensuring their future with India’s Senior Men’s squad.

But first, it was time for the talented pupils to try their hand out in their master’s skill: India’s Junior All Stars stepped into the shoes of the coach as they helped Natt in organising a ‘Youth Basketball Camp’ at the expo. The Juniors taught simple basketball drills to a 120 basketball-loving kids from dozens of schools around the city. Ranging from ages 8-18, the school-children were immediately handed the challenge not only to keep up with the Junior All Stars, but to one day, replace them!

“You school-kids are the future of basketball in India,” Natt said as he opened the Youth Camp to the gathered youngsters, “I hope to see them becoming All Stars one day, too!” 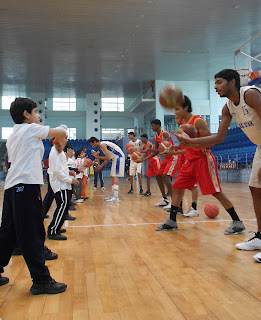 Ashok Rangeen, the joint secretary of the BFI, requested the gathered audience to first take a moment to pray for the health of BFI’s CEO Mr. Harish Sharma, who has been hospitalised over the past few months.

Enthusiastic to learn, as the school-kids descended upon the court to face the Junior Stars and Coach Kenny Natt. It’s not every day that the average basketball fan in the city gets hoops tips from a former NBA coach! Children from different schools such as DPS (Mathura Road), Montfort School, Rockfield School, Modern School (Barakhamba), St. Michael’s School, Rosary School, and Nirmal Bhartiya School, improved their game in several ways through drills to achieve the perfect defensive stance, defensive movements, shooting technique, the right form for a good jump-shot, dribbling, lay-ups, and passing… The camp touched on each angle of basketball at the Youth Camp, and then some more!

After the camp, it was then time for the school-children to return to the audience, and the All Stars to become the center of attention: Natt organised several competitions to test the skill level of some of his players. The first one was the Skills Challenge, a competition which tested them for a mixed skill-set of dribbling, passing and shooting. This challenge was won by Nitin Chopade, while Siddharth Chouhan finished at second place. In the next competition – the Big Man Medley – Natt tested the taller players for their inside and outside shooting skills. This competition was won by Aravind A. with Karan Joshua ending at second place. Finally, a 3-point shooting contest was held, won by Loveneet Singh. Siddharth Chouhan ended at second place. 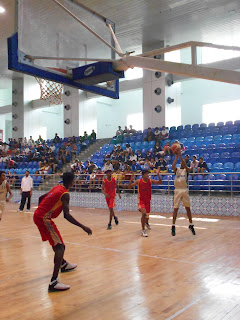 The eventful day concluded with an All Star Game between two sides amongst the Junior players: ‘Team Red’ and ‘Team White’. Team Red held a slim lead at the end of the first half of this 30 minute encounter, 27-25. In the second half, the Reds played stifling defense to hold back the Whites, and soon, found themselves comfortably up by 13 points with just four minutes left the contest.

But it was here that Team White regained their posture and scripted a strong comeback. Over the next four minutes, Team White outscored Team Red by 17-2, and suddenly, found themselves holding to a 54-52 lead. With just seven seconds remaining in the game, Team Red had the ball in their hands though: it came into the hands of Ajay Pratap Singh, who drove strong to the basket to score a lay-up, tie the game, and win a foul. With the game now tied at 54 at the last second, Ajay hit the free-throw to give this side the lead and a memorable victory, 55-54.

Aravind A. of Team Red was named as the MVP of the All Star Game. 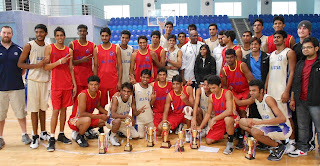 At the end of the expo, Natt gave away the prizes for the individual challenges, the winners of the All Star Game, and the game’s MVP. He also announced that an ‘All Star First Team’ and an ‘All Star Second Team’ – consisting of five players each – would be revealed soon.

But the expo came to an end with a promise by the Coach: he would definitely be back to interact with more young talents around the country in the future, and he would keep his eyes open to scout each and every prodigal basketball talent that emerges. Even the eight-year-olds!
Posted by KARAN MADHOK at 17:21