While the rest of the basketball programme in India continues aspirations to grow and achieve higher standards, there is one field in which we already rub shoulders with Asian giants like China, Japan, and Korea: Boasting of 17 officials with a FIBA license, India already has some of the best basketball referees in the continent. And these refs have been well rewarded for their efforts by getting a chance to be the men in the middle at some of the most important basketball games in recent years. 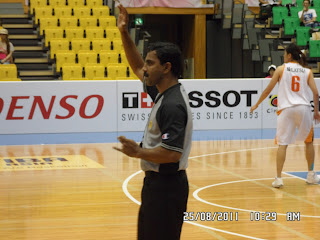 Add Tamil Nadu’s Ceciline Michael Vino Vincent Francis Victor to the list – or Michael Vino for short – an official boasting a list of credentials longer than his name! Vino was recently honoured when he was picked as one of the three referees chosen to officiate the final of the 2011 FIBA Women’s Asia Championship in Omura, Japan, between China and Korea, on August 28th this year.

“The final was the most important game that I have ever officiated,” Vino says, “The winner would not win the gold medal, but also secure their berth at the 2012 London Olympics basketball tournament. The fact that it was an exciting finish to this crucial game made my job all the more important.”

It was an exciting finish, indeed: while China were the favourites coming into the tournament, they had already suffered one loss to Korea in the group stage earlier. In the final, it was once again Korea who enjoyed the lead for the majority of the game, including at the beginning of the fourth quarter. But China made a comeback to take the lead, and then the lead flipped-flopped until the end of the game, as China survived to win 65-62 and book their place into the Olympics. 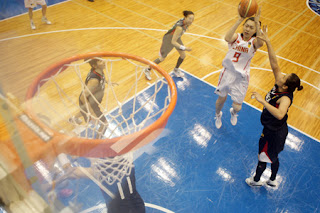 Hailing from Nagercoil in Kanyakumari district of Tamil Nadu, Vino, one of the three referees at this classic final, has come a long way in his journey as a referee. But the journey in basketball began when Vino was a player, and at one time, played in the All India University Championship. He got his referring license in TN in 1993, and soon, received the All-India license with the Basketball Federation of India (BFI) in 1996. In 2004, he achieved the highest status of a ref as he was named a FIBA referee.

Before the 2011 championship in Japan, Vino had achieved international exposure in several tournaments as a referee, including at the New-Zealand Tour for India (2005), the Crown Prince Tournament in Thailand (2007), and at the 2009 FIBA Women’s ABC in Chennai, his home state.

At the 2011 FIBA ABC, Vino had already officiated four games in the tournament before the final, including the Semi-Final match-up between Korea and Chinese Taipei. “Usually, the referees who officiate the semi-final do not get picked for the finals,” Vino said, “But after the Korea-Taipei game, I was told that I had been selected for the final, too, along with two other referees, from Russia and Malaysia. I had not expected this at all!” 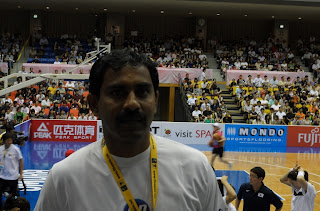 Despite the high stakes and the close finish, Vino said that the experience at the final was not stressful at all. “There was little pressure on us referees in that game,” he said, “Even though it was a close finish, the game was smooth and the players and coaches did not argue with our decisions.”

Michael Vino became the third Indian ref to be a part of an important final in the last few years. A year ago, Atanu Banerjee became the first Indian to officiate the final of a World Championship: the FIBA U17 Championship for Women in France. Later in the same year, India’s Rameshkumar Durairaju was chosen to officiate the final of the Asian Games basketball tournament in Guanzhou (China).

“Indian referees are doing well now and FIBA are giving us more and more chances” says Vino, “We’ve been able to earn respect because we have been consistent, neutral, and fair in our decisions, from the first minute of the game till the last.” 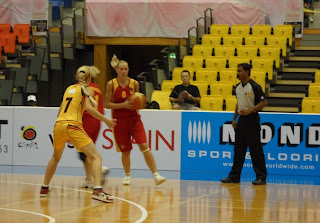 “We must continue to promote professional officiating in India – there are a lot of good referees now and we can have many more.”

Being the man in the middle at a Senior Asian final may have been a major milestone for Michael Vino, but now, he has ambitions for greater heights.

“I want to officiate in the Olympics, and then at the World Championship,” he says, “Those events are the highest platform for a ref!”
Posted by KARAN MADHOK at 13:32