Basketball stars align for shooting and dunk show in Mumbai

It was a curious scene – outside the Mastan YMCA court, was the poor Nagpada area, that of thin lanes, population outbursts, and some of the best kebabs known to man. Enter the court and it was a slightly different world, where the finest Men & Women basketball stars from all across the country gathered together for a novel Indian All Star event. They wore fancy new jerseys, participated in glittering photo shoots, and signed autographs. 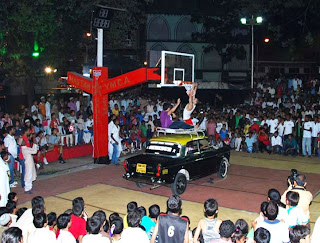 But this was a scene where these two world’s aligned beautifully. The Nagpada area has long been known for being a major hub of basketball activity in India, and it has overseen some of the greatest players, rivalries, and basketball tournaments that have been held in the country over the past several decades. That frenzied energy and fandom for the game is the perfect platform for the two-day All Star event.

On Friday night, the best shooters in the Men’s and Women’s categories took part in a three-point shooting competition. This was followed by the fan-favourite, Slam Dunk contest, which saw more than one major surprise. And the high-point of this high-energy night came when Punjabi’s point guard Talwinderjit Singh “TJ” Sahi brought out a Mumbai Kali-Peeli (Black & Yellow) taxi to the basketball court, had it parked below the basket, caught a pass from a friend sitting atop the taxi’s carrier, and proceeded to slam it home.

But the night was about so much more than that – all of the stars of the two teams, which included Vishesh Bhriguvanshi (India Men’s captain), local legend Riyazuddin, Jagdeep Singh, Trideep Rai, Yadwinder Singh, Indian Women’s captain Prashanti Singh, Anitha Paul Durai, Anju Lakra, and many others were presented with their new all star jerseys. They proudly took part in several photo-shoots and were fawned over by the local basketball aspirants. Unlike most of India, the kids in Nagpada don’t want to grow up and bat like Sachin or bowl like Zaheer; they have dreams of dribbling like Riyaz and shooting like Manisha. 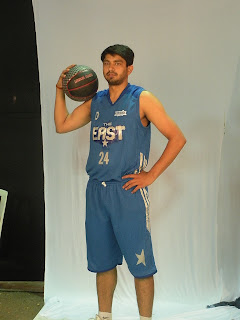 “Mumbai is the best place to promote, not only basketball, but to promote anything at all,” said Prashanti Singh, “In India, basketball is biggest in this city.”

And the biggest platform in India was presented with India’s biggest performers. A large crowd, comprising of young children, older basketball players, and hundreds of locals from the nearby areas swelled up the court, finding their seats on the ground and on the stands around the court. The night began with the Women’s three-point shooting competition, a large field where 13 of the All-Stars participated.

Four of the shooters tied with seven three-pointers made in one minute each after the first round – Maharashtra’s own Manisha Dange, and three sharpshooters from Chhattisgarh – Seema Singh, Anju Lakra, and Akansha Singh. When the second round got on for the women, it was Akansha who stood last, making a last second three-pointer to give herself the edge and the win. Dange finished second and Lakra came in third. 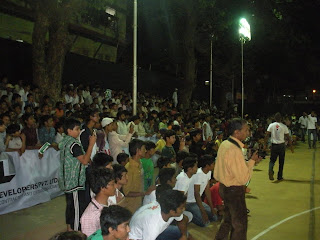 The men’s competition followed, and the field of participants was only half of the women. It made for a stiffer battle, and in the end Vishesh Bhriguvanshi, who made eight threes under a minute, was crowned Men’s three-point champion. TJ Sahi finished second.

Vishesh came out again to take part in the Slam Dunk competition, and he was joined by Yadwinder Singh, Jagdeep Singh, and TJ Sahi. The rules of the competition were simple – three judges give each player their score out of 10 for each dunk, and there are three rounds. All four of the dunkers wowed the crowd with their athletic ability. And the crowds played happy volunteers, too – it didn’t take more than a slight nudge from Vishesh before several young kids took a seat below the basket for the dunker to jump over them and slam the ball in.

Sahi, who brought on Mumbai’s famous icon – the Kali-Peeli – had many of the kids sit inside the car to watch him jump and dunk over them. The meter stayed up, and so did Sahi, who brought the house down with his effort. It was unfortunately not enough as Vishesh was able to spring out his own surprise - dunking over a motorcycle - and in the end and score just enough. In the end, the competition ended in a tie for both of India’s top dunkers. 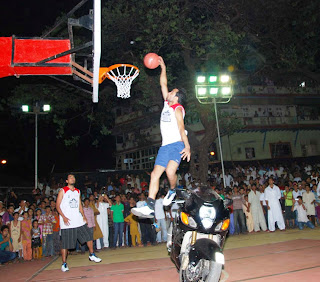 With the playful festivities of the first day over, the All Star Weekend moves into its main event for Saturday night, when both the women’s and the men’s All Star Games will be played at the Mastan court. The brand new kit has been ironed, the players have practiced, and the crowd is going to start jostling for their seats: are you ready?