NBA’s Greg Stolt: “In India, Basketball thrives because of the people’s passion.”

There could perhaps be no more suitable candidate for the NBA to send to India to help promote the game than Greg Stolt. Stolt, who works with the international operations unit of the NBA, made his third trip to India in late March/April 2011, during which time he has continued on the trail that his fellow NBA authority and the Director of Basketball Operations in India Troy Justice has been blazing for the last few years. In his most recent trip, Stolt was involved in helping conduct coaching clinics in Bangalore and New Delhi and the Jr. NBA/Jr. WNBA Skill Challenge in Mumbai and Pune.

Stolt’s resume is proof that he is the perfect candidate for the job because he brings with him experience of playing high-level basketball in the United States and across the world, as well as experience in behinds the scenes management that the development of the game requires, especially in other parts of Asia. 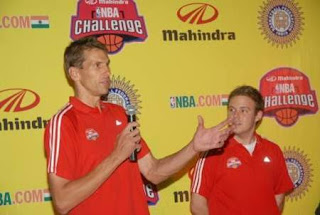 Stolt played college basketball in the University of Florida, and after finishing his degree, he tested the waters of the NBA as a player with a few tryouts. When that didn’t work out, he spent his professional career living the dream of a international basketball journeyman: from the D-League in the US, to league’s in Belgium, Spain, France, Japan, and Australia, Stolt played basketball overseas for six years. Afterwards, he settled with a job in Japan, which helped him improve his business acumen.

“The NBA recruited me to work for them because I’ve seen how things work in several different countries,” Stolt says, “My mixed background of business, basketball, and international experience helps a lot.”

Stolt has been working with the NBA for two years now, during which time he has visited India three times: In December 2009, he came to India for refurbishments and inaugurations of basketball courts in Mumbai and Chennai. Then again in the summer of 2010, he was involved with the running of the first season of the Mahindra NBA Challenge for two months.

“My job is to help improve the level of the game in India,” Stolt adds, “Along with Troy Justice and the rest of the NBA’s team here, I have been working with several people locally to build a strategy for the growth of the game here.” 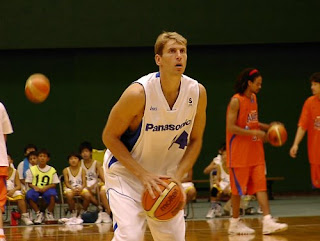 Stolt also has knowledge and experience of the business of basketball in three other important Asian countries which could be used as reference models for the game in India – China, Japan, and South Korea.

Comparing the game in India to the other three countries, Stolt said, “These other markets are probably a lot more mature than India right now, in terms of their federation structure, their infrastructure, and the system of basketball development from the school level.”

“But in India, we see that change is coming – sport is growing quicker than ever before, especially since the success and popularity of the IPL or the Commonwealth Games. India is a little behind, sure, but it’s getting there. The best thing about this country is that its proactive and the people here are yearning for change.”

This year, the tasks were varied for Stolt, but equally important nonetheless. Since the NBA is targeting teaching the game to younger players in India so that they can get an early start, both the coaches training programme and the Junior Skills’ Challenge programmes are going to be crucial.

“We can’t go out and coach every child in this country,” Stolt says, “That’s why we have been holding the coaches’ training programme, so that these coaches know how best to train 12-year-olds. This programme was especially helpful for the young coaches, whom we provided with as much of our own knowledge and resources as we could.

In the two coaches’ clinics held in Bangalore and Delhi, there were about a 100 coaches in attendance each time. Stolt’s NBA-India associates Troy Justice and Marty Conlon extend the clinics to other cities like Pune, Mumbai, and Chennai, and a total of 500 coaches are expected to have been involved countrywide.

Meanwhile, the Jr. NBA/Jr. WNBA Skills Challenge was set out to involve students from over 500 schools in Bangalore, Chennai, Mumbai, Delhi, and Pune in a youth basketball development programme. Stolt worked in Pune and Mumbai, where an average of 140 kids participated from each city.

“I think the Junior Skills Challenge was right on target,” says Stolt, “When the kids came out to compete in the challenges, we saw that the coaches we had worked with earlier had already prepared them in the right way. They knew the right drills and the fundamentals."

With the on-field work over, Stolt returned to the NBA office in New York to work on the other side of his job: planning and strategy. One of the NBA’s long term programmes, he says, has been to identify more markets in India for the type of programmes that have so far been held in some of the country’s major cities. The NBA is hoping to develop a database of the people with whom they have been involved in India and also study the results of the public’s reactions to the various programmes held by the NBA here. “We want to shape things to be perfectly suitable for the Indian market,” he says.”

And as far as he is concerned, Stolt is certain that the people that he has worked with will make the tasks a whole lot easier. “The one thing that pleasantly surprised me a lot about coming and working with India were the people involved with the game here,” Stolt said, “Unlike China, Japan, or Korea, who have structured leagues and systems, there is no guaranteed career paths for the coaches, players, trainers and referees in India: but they do it for the love of the game, and the game thrives here because of the people’s passion. That is a wonderful thing.”
Posted by KARAN MADHOK at 13:01