Mumbai’s most-storied and oldest hoops competition, the All India Ramu Memorial Basketball Tournament (RMBT) at the Indian Gymkhana in Matunga, got off to an intriguing start on Sunday, April 10th as the holders IOB (Chennai) held on for an intense, close victory over the underdog Cochin Customs side. The hosts, Maharashtra, saw their Women’s team dominate South Western Railway for a comfortable 16 point victory.

The RMBT, which is now in its 27th edition, is being sponsored by United Phosphorus Limited (UPL). The tournament has a lot of history in the city of Mumbai, as it started off in the mid-1960s as a local, inner-city competition, and in the late 70s became the All India tournament that it is today. For a period of 13 years between 1993-2005, the tournament was discontinued, but it has gained momentum again since 2006 and has once again become an essential part of Mumbai’s hoops culture. 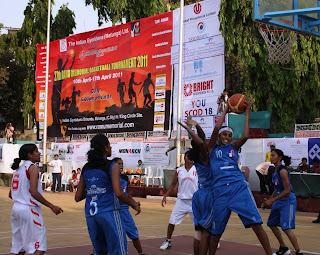 One of the men’s teams that has always been successful at Ramu have been the Indian Overseas Bank – Chennai (IOB), who have won it three times in the last five years, including last year’s edition. Featuring the likes of Hareesh Koroth, Abhilekh Paul, Mihir Pandey, and the legendary S. Robinson, this team rolled in with high expectations but had a surprisingly slow start against Kerala’s Cochin Customs side. In a tight game throughout where neither team could take a huge lead, IOB survived to win 64-63. Paul scored 23 for the winning side while Pandey added 20 to go with 10 rebounds. For Cochin, Eudrick Perreira (17) and S. Monish (16) were the high scorers.

The first game of the tournament was a rousing victory by home side, Maharashtra Women, against South Western Railway from Karnataka. Smruthi was at her unstoppable best for Maharashtra, scoring 31 points as her team got off to a strong start. They held on to a comfortable 13 point lead at the half and maintained a steady tempo for the rest of the game to win 72-56. Manisha Dange added 17 for Maharasthra, while Savitha had 20 for South Western Railway.

The last game of the night was an encounter pitting several Indian superstars against each other – Western Railway Men came out to the court to battle Punjab. Western Railway wanted to stamp their dominance early, as they held on to a 10 point lead after a defensively strong first quarter and kept the lead uptil halftime. Punjab made a comeback in the third, but in the end, their efforts weren't strong enough from stopping Western Raiwlay from racing away to a 71-65 victory. Gagan Deep Singh was the star of the show for the winning side, scoring 18 points and grabbing 15 rebounds. Jagdeep Singh, who was named 'Best Player' at the previous night's All Star Game, kept up his good form with 28 points and 8 rebounds for Punjab, but it wasn't enough to secure a victory. 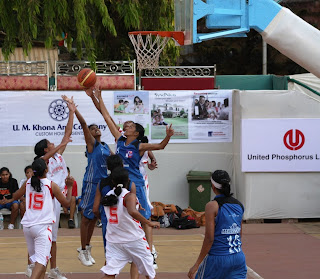 Vinod Muthukumar, the tournament director, was encouraged by the start to the competition and was looking forward to more interest from the public over the next week. “This year of the RMBT will be a little different and we are hoping to add more excitement and fan interaction,” said Muthukumar, “The Men’s competition, for instance, will see the eight participating sides in two groups, and the best two teams from each group will then play in another round-robin pool. This way, the crowd will get to see more competitive games.”

The organisers of the tournament are also putting in an extra effort this year to reach out to the fans. The tournament will be shown live throughout on local Mumbai channel YOUSCOD 18. The Semi-Finals on 16th April and Finals on 17th April 2011 will be telecast live on Doordarshan and the Finals will be broadcast live on DD along with live running commentary on All India Radio's FM Gold.

This is also the first year that the US-based side Shooting for Success (SFS) will be taking part in the RMBT. SFS have been a crowd favourite at Mumbai because of their appearances at the Savio Cup. They are considered to be one of the favourites to lift the crown, along with IOB and ONGC.
Posted by KARAN MADHOK at 14:10