The best basketball players in India came out to put up an extraordinary display of skill, athletic ability, and hoops intelligence at the Mastan YMCA court in Nagpada, Mumbai on Saturday, April 9 at the Indian All Star Games. The finest Indian men and women players, from all across the country, were invited to play in these exhibition matches that produced plenty of thrills and a few dominating performances. 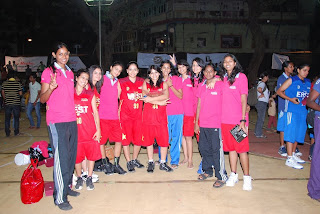 For both the games, the players were divided into two teams each, WEST and EAST. The toast of the night was definitely Geethu Anna Jose, India’s biggest basketball star, who has recently been invited to tryout with several teams in the US-based basketball league, the WNBA. On Saturday, Geethu was at her dominant best, scoring 41 points in the Women’s All Star Game to lead the Team WEST to a 77-74 victory over Team EAST. In the Men’s game, Team EAST won 95-82.

The first-of-its-kind event in India was organised by Ibrahim Lakdawala of Lakdawala Developer PVT. LTD. 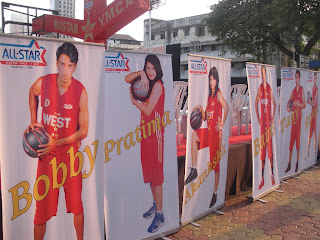 In the Women’s game, WEST took an early lead behind Geethu’s unstoppable inside play and support from Indian woman’s captain, Prashanti Singh (21), but sharp-shooting by Delhi’s Raspreet Sidhu (21) kept the EAST close in the game. With WEST holding on to a comfortable eight point lead at the beginning of the last period, EAST began to mount a comeback with a flurry of three-pointers by Bharti Netam, Anju Lakra, and Manisha Dange. But it wasn’t enough and the WEST held on for the three-point victory.

Hindi film actress Neetu Chandra was an added attraction for the fans present, as she displayed her own hoop skills as part of the Women’s EAST team. Chandra, who has been an active basketball player, has been participating in regularly in basketball events at the Mastan YMCA. 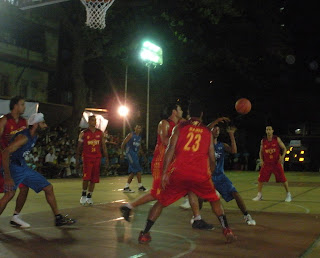 The Men’s game featured some exciting and athletic play, sharp passes, and fancy lay-ups by some of India’s finest. The EAST side made it a point to be dominant from the very beginning, leading 42-33 at the half and sustaining their strong play for the rest of the game, too. Trideep Rai (21) and Yadwinder Singh (18) did most of the damage from the EAST team, while Jagdeep Singh Bains scored a game-high 22 for WEST. In the end, EAST ran away to a 95-82 victory. 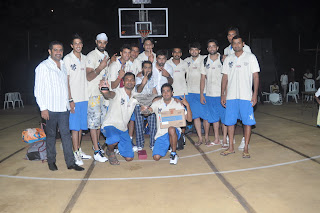 Several awards were handed out to the outstanding players of the game, including BlackBerry phones, Laptops, travel bags, Grinder Mixer, and cash.

The All Star Weekend’s first day was Friday, April 8th when the gathered crowd witnessed a Men’s and Women’s 3-point shooting competition, won by Vishesh Bhriguvanshi and Akansha Singh respectively, and a Men’s Slam Dunk contest, where Bhriguvanshi and TJ Sahi were named joint winners.
Posted by KARAN MADHOK at 12:43