Geethu Anna Jose, the legendary Indian Center, has finally been given a shot at her WNBA dream. The superstar who captained Indian Women’s team at the FIBA Women’s Asia Basketball Championship (ABC) in Chennai (2009), has been given the rare honour as she was invited to a tryouts with two WNBA teams in the USA – the Chicago Sky and the Los Angeles Sparks.

Jose (25), who was the leading scorer at the Chennai ABC, become the first Indian player to get the top scorer honour at any ABC. She has represented India in several major tournaments, including the 2006 Commonwealth Games in Australia and the 2010 Asian Games basketball championship in Guangzhou (China).

Jose is currently working for Southern Railway in Chennai, and, representing Indian Railways, has won seven consecutive National Basketball Championship titles. She was also the first Indian women to play professionally in Australia, when she represented the Ringwood Hawks, a lower division team in the Women’s National Basketball League (WNBL), and won the league’s Most Valuable Player award in 2008.

“I have waited a long time for this opportunity – I can’t believe that it’s finally here.” said Jose, “It has been my dream to play at the highest level – the WNBA. It does not matter which team gives me the opportunity there – I just want to compete.”

The six-foot tall Jose has admitted that she will have to adapt to the power forward position when trying out with taller women in the US. She will travel to Chicago and Los Angeles to try out with the Sky and the Sparks – the Sparks have been one of the most successful teams in the WNBA, winning two championships and three conference titles in the last 10 years.

Jose has conveyed her sincere thanks to her employer Southern Railway, Mr. Harish Sharma of the BFI, and Troy Justice, the Director, NBA India Operations, for all their whole hearted support. She also thanked the Hindustan Group of Institutions, who have come forward to sponsor the tour for Jose to USA. “I will try my best to give a good performance in the tryouts,” she added.

The BFI's Harish Sharma said, “This is an incredible opportunity for Geethu Anna Jose. We are delighted for her and everyone who supports basketball in India will hope and pray for her success with the tryouts. She was offered the same opportunity last year, but due to complications she couldn’t make it – we are glad that this time, her dream is one step closer to realisation.” 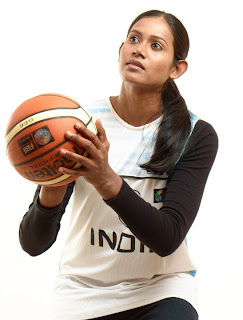 “This has been one major step for us at BFI at promoting Indian players throughout the world,” Sharma added, “We will be looking to support such opportunities for other basketball players in India as well – the more players that proper outside of India, the more prosperity they will be bringing to the game of basketball in India.”

Anand Jacob Verghese, the CEO of Hindustan Group and Pro Chancellor, Hindustan University expressed his happiness in supporting Geethu. "The Indian cricket team has made all of us proud by winning the World Cup," said Verghese, "Now it is the turn of Geethu: she will be a role model for students. I wish that she gets the ultimate honour: a WNBA selection."

Jose will leave for the USA in about two weeks. She will participate in the Ramu Memorial Basketball Tournament in Mumbai before that.

UPDATE: Along with tryouts scheduled with the WNBA teams Chicago Sky and LA Sparks which were announced over a week ago, Indian Basketball star has now been invited to tryout and practice with a third WNBA (Women’s National Basketball Association) team during her USA trip: the San Antonio Silver Stars. Jose will be in America from April 23 – May 8, during which time she will be the first ever Indian basketball player to get an opportunity to try out for the WNBA.
Posted by KARAN MADHOK at 14:08