Living the Game: The need for a grassroots basketball movement in India

In large pockets of America, basketball is more than a sport — it is a part of everyday life. A basketball court is a social center, basketball shoes are essential fashion accessories, and hip-hop music/culture remains eternally intertwined with the game. In such cultures, “playing ball” is more than being in a professional league, a college tournament, or as part of a fitness regime — “playing ball” starts from the grassroots, it’s a recreational activity, just something to do, something embedded deeply in the lifestyle.

The English, and other Europeans, and South Americans have football — the soccer kind of football — it is for them a recreation, a get-together with friends, the perfect pastime. 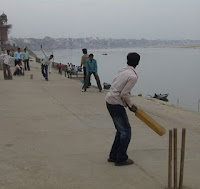 In India, our favorite pastime is cricket. Every thin lane, or gullie in India is a cricket pitch, every wooden stick a bat, every round object a ball. It is deeply embedded in modern Indian culture — the majority of Indian societies see children having impromptu cricket matches in their neighborhood, by the ghats of the Ganga, every barren field is a stadium, cricket references and metaphors have become part of everyday speak in the country, and get-togethers in roadside tea-shops only discuss cricket scores.

The result of our addiction with cricket is that it has become the biggest thing in India since Butter Chicken. Cricket apparel rules in athletic stores across the country, the majority of sport news in India is about cricket, and every Indian from every strata of society unites under the banner of cricket. That is why India is now one of the strongest cricket teams in the world, Indian players the world’s best, and the Indian Premier League (IPL) of cricket the world’s richest.

So when the NBA decided to tap the 1.2 billion strong Indian market to popularize basketball, they knew they were up against some tough competition. After launching an NBA-India website, their most recent development has been a deal with rich industrial conglomerate Mahindra Group to launch a recreational league in three Indian cities: Mumbai, Bangalore, and Ludhiana. The league will tip off in a month’s time and will last for seven weeks.

Eventually the Basketball Federation of India (BFI) plans to launch school and college leagues with the NBA’s guidance to promote the sport amongst the youth. When I spoke to BFI president Harish Sharma, he said the idea is to use the school, college, and city recreational league as a launch-pad to eventually develop a professional basketball league in India in three years time.

Yes, these efforts are going to increase urban interest for basketball in India, but will it really influence more people to love basketball the same way they love cricket? Everyone interested in the development of basketball in India (BFI, NBA, and those working for the game on a local level) admit their eventual goal is to make it the second favorite sport in the country, but even for that to happen, the game has to be more culturally ingrained into our lifestyles.

I believe what is really needed is a grassroots movement, a movement to make basketball more than a game but a culture. Why does the NBA, for example, sell so easily in a country like the Philippines? NBA players have created waves in the Philippines for years, including the famous Gilbert Arenas trip a few years ago. The answer: So influenced by Americanism, basketball is part of everyday lifestyle in the Philippines, bringing with it its swagger, the hip-hop culture, and NBA fanaticism. 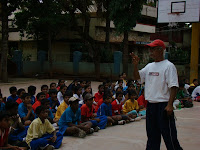 For India, one such movement to popularize basketball into rural and grassroots lifestyle is the Sumpoorna Basketball School. Sumpoorna is the name of a basketball camp — or like its founder Subhash Mahajan likes to call “a grassroots basketball revolution” — that has been slowly growing in small, rural town of Tumkur in Southern India over the past five years. Driven by a lifelong love of basketball, Mahajan has set up this basketball camp mostly for small town and village youth, which has grown over the years to have taught basketball basics to up to 6,000 youngsters around the rural area, and launched the Sumpoorna Basketball Tournament where dozens of small school and recreational teams compete against each other.

Mahajan, who is from Kapurthala in Punjab, spent nearly three decades as a basketball coach before setting up the Sumpoorna School in 2005. He chose Tumkur, which is a village near the much-larger and richer city of Bangalore, in Karnataka.

“In India, sports and money are not compatible,” Mahajan said, “Unless of course, that sport is cricket. Selling the game of basketball amongst city kids in posh schools might change the commercial culture, but the love of the sport has to come from the grassroots level — it seems that I’m fighting this battle alone.”

“In India, kids below Grade 9 can still be engaged in basketball and taught the basics — unfortunately, after that, they have to turn toward their ‘real life’, their studies, their other career, and basketball fades away.”

Mahajan’s camp is a unique concept for India — it is a summer camp of basketball skills in a rural area. He has spent his own money into a large basketball campus, where he already has three courts and is now investing for 13 more. Kids who join the camp for around five days, where they stay in residence and play ball, all day.

As the awareness and interest for the game has spread, Mahajan has been able to organize large tournaments, and is looking to get larger. “We want to tie up with more schools, especially from the bigger cities, so that they can learn basics. I want them to live the game and not just play it.” A major step that Mahajan is looking to take with Sumpoorna is to invite senior basketball players in India to oversee and promote the Sumpoorna tournaments.

Another unique feature of the Sumpoorna tournaments has been that the games are played without refs. Indian sport has an unfortunate reputation of being shrouded in corruption and bias — and the referees have regularly been the ones footing the blame for unfair calls and pre-meditated results. The injustice was highlighted a little more than a month ago, when the referees and officials were accused of helping the home team at a major national university tournament. At Sumpoorna, the players are expected to resolve the calls amongst themselves, and more often than not, the system works.

“The players from the age 9 onwards are taught to self referee and agree on consensual play,” he said, “It is basketball at its best — the way we played it here forty years ago.”

Mahajan is from an old-school brand of hoop lovers who played the game because they were addicted to the game, and even after his prime, he could never leave the game behind. With Sumpoorna, he has been able to provide a platform through which youngsters can become hoop addicts from an early age, and as they grow, basketball becomes part of their cultural upbringing.

If these efforts are complemented by the popularization of the game in urban India, we could be heading toward a future where basketball could become a more common pastime, and as the number of players grows, the quality of basketball will eventually improve, too.