I'm childishly giddy about writing the following sentence: Alexsander Bucan, the head coach of the Indian Men's Basketball Team 'The Young Cagers', will be coaching hundreds of Indian basketball coaches in Kochi.

From the Press Trust of India: 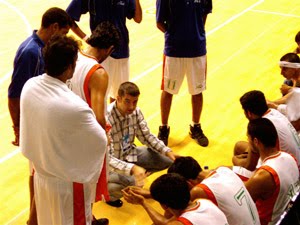 In order to bring about a standardisation in the coaching system, the Association of Basketball Coaches in Kerala will be conducting a five-day Clinic here from March 7 to 11.
Joseph Chaco, Secretary, Association of Basketball Coaches, Kerala, said one of the drawbacks in Indian basketball coaching system is the lack of a uniform approach and this aspect is reflected in the quality of coaching that is being imparted in various schools and colleges in the country.
Over 100 coaches, both professional and amateur, will attend the camp, he said.

The course content covers a wide range of subjects including techniques, tactics, sports science, nutrition and officiating, he said.

Keep your eye on this news - if succesful, such camps to coach coaches will only help to spread knowledge of basketball fundamentals to more parts of the country. I'm hoping that other state basketball associations in India follow this programme's lead to host their own.

Bucan, a Serbian, has been the head coach of the Young Cagers for the past two years. He has had 14 years of experience with coaching positions in national and professional squads in Serbia and Yugoslavia.