Held at the Indian Gymkhana in Mumbai, the RMBT is an annual, prestigious All-India basketball tournament, now in it's 26th edition. The tournament has historically featured the best team's in India competing for the coveted trophy.

From the tournament's press release: 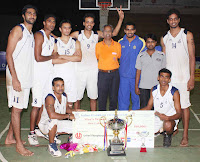 Indian Overseas Bank, improving in every match since their first league match loss to Indian Army, gained sweet revenge right at the end, when they outplayed the Indian Army team 71-54 in the men’s final to lift the glittering 26th UPL Ramu Memorial Trophy, sponsored by United Phorphorous Ltd. and earn a purse of Rs 1 lakh at the Indian Gymkhana, here, on Sunday.
Earlier, in the women’s final, South East Central Railway ended the four-year domination of Southern Railway, handing them a 67-57 defeat to lay their hands on the Kapila Khandvala Shield, along with a purse of Rs 50,000.

Indian Army were done in by the ‘Triple Towers’ of Indian Army, S Robinson, Vineeth Mathew and Mihir Pander... Robinson was easily the standout among both teams... He ended up with the day’s high of 24 points, while Mathew got 18 and Pandey 13. In fact, such was the dominance of IOB that they had scored 12 points before Army opened their account. With Sambhaji Kadam a pale shadow of himself and Nixon failing to find his scoring touch, Army were always playing catch up.
The women’s final saw SECR score over Southern thanks to their entire team pulling their weight. On the other hand, Southern’s reliance on Geethu Anna Jose to deliver the goods proved their undoing with the other players failing to rise to the occasion.

S. Robinson was named player of the tournament. By the way, the 'S' stands for 'Sozhasingarayer' - no wonder the media chooses to stick to the initial! This has been sweet redemption for the basketball sensation, who spent three years in basketball exile after being banned from representing his state Tamil Nadu and the national team.

Pushpa of SEC-Railway, for her consistent play throughout the competition, won the Women's player of the tournament. 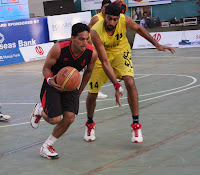 Earlier, the Men's semi-finals as well as the slam dunk and three point competitions took place on Saturday evening at the Gymkhana. In the semis, IOB, led by Robinson's 29 points, defeated the rather lukewarm challenge of ONGC 74-57. Indian Army defeated last year's winners Western Railway 71-57.

Nixon from the Indian Army won the 12-man field of the three point shootout. TJ Sahi of Punjab faced a tough competition from last year's finalist Vishesh Bhriguvanshi in the slam dunk competition - TJ eventually won, dunking over two motor bikes and a carrom board in the final round (!), after which he did his signature reverse slam.

Anyways, this was all in all an exciting tournament, garnering a lot of attention for Indian basketball teams and stars. Granted, for the sport to really capture the imaginations of the audiences, we need to have a consistent league system instead of irregular prized/sponsored competitions. The signs are good though - with the NBA's involvement with BFI as well as their interest in the promoting the game to an Indian audience, I have no doubt that basketball, the country's second fastest growing sport, has nowhere to go but up...