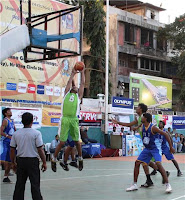 Held at the Indian Gymkhana in Mumbai, the RMBT is an annual, prestigious All-India basketball tournament, now in it's 26th edition. The tournament has historically featured the best team's in India competing for the coveted trophy.

In the men's competition, the teams were divided into two groups:

Western Railway, led by V-Town prodigy and captain of the Young Cagers Vishesh Bhriguvanshi, have been on fire so far, winning all three of their group games. Vishesh has been the main perpetrator, highlighted by his 42 point scoring outburst in the close 85-80 victory over Vijaya Bank in their second game. They also beat Chennai Customs and ONGC to finish as group leaders.

ONGC also qualified from Group A, beating Vijaya Bank and Chennai Customs in their two blowout victories. Mohit Bhandari and Trideep Rai have been consistent performers in their matches.

Indian Army and the giant-killers Indian Overseas Bank (IOB) qualified from Group B for the semi-finals. Three teams in the group - IOB, Indian Army, and Punjab - finished with two victories each, leaving the qualifiers to be decided by point difference.

The big surprise were IOB, led by the recent resurgence of veteran player S. Robinson. After going 1-1 in their first two games, IOB needed a big win against a favoured Punjab side to qualify. Punjab have their own big time performers in Jagdeep Singh and TJ Sahi, but IOB rallied to win their game Thursday night 95-64, led by Robinson's 31. They finished top of the group.

Indian Army lost their first game to Punjab, but recovered well with balanced teamplay and won their next two games against IOB and RCF-Kapurtala, finishing second place in the group.

There is only one group for the Women with these four teams: Southern Railway, SEC Railway, Karnataka, and Aamchi Mumbai.

Southern Railway, featuring India's basketball starlet Geethu Anna Jose and Anitha P, started off badly with close loss to SEC Railway. They went on to win their next two games against Karnataka and local favouties Aamchi Mumbai to enter the finals.

They will be joined by SEC Railway, who have won all their games, led mostly by the combined efforts of M. Pushpa and Anju Kakra. 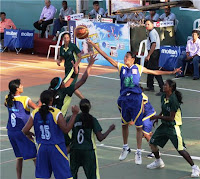 Both the Men's and Women's Finals will be played on Sunday, February 28th. SEC Railway will play Southern Railway in the Women's Finals at 5:30 AM. The winners of the two Men's semi-finals will play the final at 7:30 the same evening.

The tournament is being played on international standard Teraflex courts and held under floodlights in a specially erected stadium. In an interesting new endeavour for Indian tournaments, a statistics programme acquired from FIBA website is being used to track individual and team statistics such points scored, shooting percentage, 3 point percentage, rebounds, assists, steals, etc. The information is regularly uploaded to the tournament's official website: www.ramumemorial.com.

As in the past, entry is free for spectators and this is being done especially to promote basketball among students and youth.

"The crowd is building day by day," said Muthukumar, "Now that the competition is getting stiffer, the audience is getting more eager. The semi final line up looks interesting."